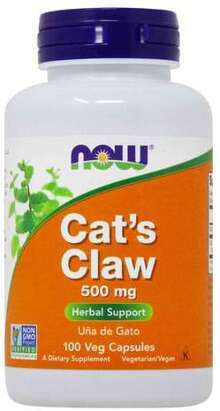 Cat's Claw has long been a traditional herb in South America. It has been known for its anti-inflammatory properties, often relieving pain from rheumatism or arthritis. It also has been shown to have anti-viral qualities such as treating shingles, cold sores, Herpes, etc. Cat's claw's anti-fungal qualities such as Candida have also been effective. Cat's claw has had a confounding effect on autoimmune and inflammatory responses. For instance, cat's claw's alkaloids enhance the immune system, namely, it has an effect on white blood cells to engulf and digest harmful micro-organisms and other foreign matter. This effect on phagocytosis, the ability of white blood cells and macrophages to attack and destroy harmful micro-organisms, have also indicated that cat's claw has some anti-tumor properites. NOW's Cat's Claw is 100% pure cat's claw and is all natural. NOW Foods prides itself on offering health food and nutritional supplements of the highest qualtiy at affordable prices. AllStarHealth.com is proud to provide the highest form of cat's claw at one of the most reduced prices in the market.

Cat's Claw Description from Now
at’s Claw, also known as the “life-giving vine of Peru,” “saventaro,” or “uña de gato,” is a thick woody vine indigenous to the Amazon rain forest and other tropical areas of South and Central America. It has been revered by native herbalists of the region for over 2000 years and is valued for its many uses. Modern scientific research has determined that its characteristic alkaloids are responsible for its biological activities.

Manufacturer's Disclaimer
For adults only. Not recommended for pregnant/nursing women. Consult physician if taking medication or have a medical condition. Keep out of reach of children.