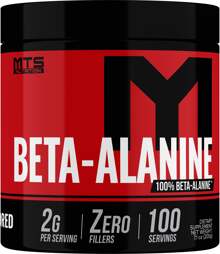 Go to Store
Quick Links to Deal PricesHow does this work and how do stores get listed? See our disclosure below to learn more.
Size
Deal Price
200 Grams
$34.39
Go to Store
Go to Store
Compare store prices

Every athlete has felt the uncomfortable burning that inevitably sets in during intense training. Try as you might, the longer and harder you train, the worse the burn gets, ultimately forcing you to cut your training short and miss out on those last few muscle-building reps.

The reason you keep getting those burning sensations deep in the muscle belly is that your body has reached its buffering capacity. It simply can’t clear the metabolic waste that accumulates fast enough during an intense workout.

What you need is Beta Alanine.

Beta Alanine is an amino acid that increases muscle concentrations of the powerful intracellular buffer carnosine.[1] Greater levels of carnosine enhance your body’s ability to remove metabolic waste products that build up during exercise, translating to reduced fatigue, increased endurance, and superior performance.[2,3] With beta alanine you’ll be able to go harder, for longer reaping more and more gains from every single training session.