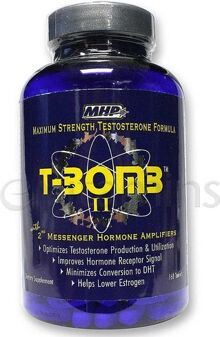 Go to Store
Quick Links to Deal PricesHow does this work and how do stores get listed? See our disclosure below to learn more.
Size
Deal Price
168 Tablets
Buy 1 Get 1 FREE
$73.99
BOGO
Go to Store
Go to Store
Compare store prices
See all MHP Products on PricePlow
Ingredients

For over a decade, MHP’s legendary T-BOMB has been synonymous with “testosterone enhancement,” and is perhaps the most popular testosterone booster ever created. When MHP first introduced the original T-BOMB back in 2002, it quickly became the number #1 selling testosterone formula. In fact, some industry retailers credit T-BOMB with developing the massive popularity of the entire testosterone enhancement category. Then in 2004, MHP took testosterone supplementation to another level with the development of T-BOMB II and its revolutionary 5-Phase Hormone Optimizing Complex. Simply put, when it comes to testosterone boosting formulas, T-BOMB stands alone.*

Even though T-BOMB II is already viewed by many to be the premium testosterone boosting formula, MHP recently put together a team of Ph.D.s and hormone specialists to embark on a research initiative to develop an even more effective testosterone formula. However, the researchers concluded that they could not formulate a better blend of ingredients… T-BOMB II’s formula was so advanced and so far ahead of its time, the researchers concluded there was really only one solution – make it stronger! This has led to the creation of T-BOMB 3xtreme, a clinically supported formula with 20% greater potency of key active ingredients.*

MHP was so confident of this new formulation that we decided to put it to the test in a much more rigorous clinical trial setting than testosterone supplements are typically subjected to…and the results were nothing short of mind blowing! In collaboration with scientists at the University of Tampa, we gave T-BOMB 3xtreme to elite athletes (Division II athletes) training upwards of 10 times weekly for six weeks, including competitive games, practices and weight lifting. The conditions were so harsh that the athletes taking a placebo actually decreased testosterone and free testosterone, and lost lean body mass.*