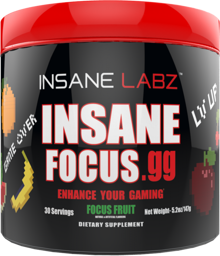 Go to Store
Quick Links to Deal PricesHow does this work and how do stores get listed? See our disclosure below to learn more.
Select Variation(s):
Size
Deal Price
30 Servings
$24.99
Go to Store
Go to Store
Compare store prices
See all Insane Labz Products on PricePlow

Go to Store
While Supplies Last!

Insane Focus is an enhanced version of its predecessor Insane Focus. Developed by professionals in the eSports scene, Insane Focus will deliver unsurpassed energy & superior focus for not only gaming but for your daily activities. We recognize the expanding presence of eSports and just like anything competitive we aim to give our players the mental edge.Take advantage of Insane Focus new generation of energy enhancement and #FocusUp.

Complex influence on the nervous system

Addition of vitamins C, B6 and B12

Perfect assimilability of the ingredients

Insane Labz Insane Focus is a dietary supplement containing the complex of ingredients influencing the level of energy, concentration, reaction time and mental efficiency. It is addressed to people practicing e-sport.

Caffeine – a substance from the group of methylxanthenes, it exerts wide influence on the nervous system. Caffeine is known from its stimulating effect. It happens thanks to its ability to increase the level of adrenaline, noradrenaline and dopamine in the circulation. Their increase makes our organism stay on the alert, contributes to the increase of energy level, concentration and the willingness to take action. It may reduce the feeling of fatigue, thanks to decreasing the activity of adenosine inhibiting the nervous system.

Applying the mix of three caffeine forms in the anhydrous form, in the form of citrate and malate InfinergyTM. allows to enjoy its effect for a long time, as these forms are characterized by various times of assimilation.

Beta-alanine – the form of alanine amino acid, along with l-histidine they compose carnosine. Carnosine buffers pH drop connected among others with the creation of lactic acids in muscles during physical activity. It may also reduce oxidative stress, created around the nervous system. Beta-alanine may potentially compete with inhibiting neurotransmitters, such as glycine or GABA, which may translate to their reduced effect. The influence of this component on BDNF growth - brain-derived neurotrophic factor has also been observed.

Taurine – non-protein amino acid, which may exhibit psychoactive effect. Along with caffeine it is used in energy drinks, because of a possible synergy of effect, in the form of reducing side effects of caffeine activity.

Tyrosine – is a precursor to building catecholamines – adrenaline, noradrenaline and dopamine, thanks to which it may influence their more efficient reconstruction. It is used most often to improve concentration and energy.

OXYGOLDTM – the source of fulvic acid. It demonstrates the ability to increase the absorption of stimulating components and nutrients, thanks to which it improves the effectiveness of the whole preparation. It also has antioxidant properties.

AMPiberry - proprietary extract from common juniper berries, which may extend the effect of other stimulating ingredients. It may increase the concentration of superoxide dismutase and independently neutralize the excess of free oxygen radicals. It has anti-inflammatory effect, thanks to which it may reduce the feeling of pain. It demonstrates the effect of reducing the feeling of fatigue, which allows to maintain the activity for a longer period of time.

EndurlacTM – the form of glucuronolactone (glucaric acid in the form of lactone), another popular ingredient of energy drinks, toned in with caffeine. It is an antioxidant, it may support organism’s detoxification by removing harmful metabolic products.

Vitamins C, B6 i B12 – vitamins from group B actively participate in many processes related to nervous system regeneration and neurotransmitter metabolism. They influence energy metabolism and allow to save proper psychological functions. Vitamin C, on the other hand, as one of the basic antioxidants allows to reduce reactive oxygen forms, which may destroy healthy organism tissues.

The composition of Insane Focus ingredients was selected in such a way so that to provide the user with the increase mental efficiency, by increasing the features especially useful in electronic sport. Among these we should enumerate especially the improvement of reaction time, which may allow to make a move before the opponent. Increased clearness of mind and concentration influence better assessment of a given situation and making faster, accurate decisions.

Maintaining stable energy level for a long time and reducing the level of mental and physical stress allows to avoid an unpleasant feeling of energy drop, which could influence the deterioration of results in a critical and final moment of the game.

Insane Labz Insane Focus is mainly recommended to players who want to improve their mental efficiency in order to achieve better results in e-sports. It will also work well to improve the functioning of the organism during the day and as a supplement supporting strength workout effectiveness.