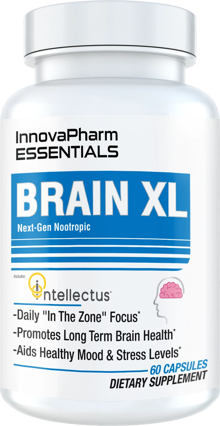 Go to Store
Quick Links to Deal PricesHow does this work and how do stores get listed? See our disclosure below to learn more.
Size
Deal Price
60 Capsules
$44.99
Go to Store
Go to Store
Compare store prices

Let’s face it. The world is crazier than ever, and average human stress levels are off the charts! Not only do stress and environmental factors interfere with our productivity, they also lead to the aging of different aspects of our body, especially the brain. Never before has there been more of an urgent need for a natural product that not only helps us focus more clearly and reduce stress, but more importantly slow down the aging process and maintain the longevity of one of the most important organs in our body, the human brain. BRAIN XL is the first nootropic specifically formulated with this intention.†

Do you ever have one of those days where you wake up in the morning feeling a bit groggy, slow to remember what’s on that massive list of tasks that need to get done; so you immediately make a b-line to the kitchen and throw down one, two or more cups of coffee just to feel “good”? Three hours later you’re already running out of gas so you crack open an energy drink (aka a soda with extra caffeine). Now you’re so overstimulated you can’t even think straight and you know you’ve got another one or two hours until you completely crash and it’s game over. If one of those days are actually the majority of your days then you need a new approach! Start your day off with BRAIN XL’s all natural nootropic formula consisting of high quality ayurvedic herbs, neuro-communication enhancers and acetyl-choline optimizers, allowing you to obtain the mental edge you constantly seek while avoiding the overstimulation and inevitable crash.

THE MAGIC INGREDIENTS THAT GO IN EVERY SERVING OF BRAIN XL:

BRAIN XL includes a 600mg clinical dose of pure Alpha-GPC, a highly bioavailable precursor to acetyl-choline which works as a neurotransmitter involved in memory, attention, skeletal muscle contraction and may help prevent cognitive decline. Alpha-GPC is able to cross the blood-brain barrier making it the best cholinergic ingredient for increasing both brain and plasma levels of choline.†

Bacopa monnieri has been a staple in ayurvedic medicine for centuries. It is an herb used to support memory, cognitive performance and nervous system health. Also known as brahmi, studies have shown that bacopa has adaptogenic, nootropic and neuroprotective effects. Bacopa can support brain levels of gaba and serotinin, a multi-faceted neurotransmitter impactive mood, cognition, reward, learning and memory (among other things). Gaba is the body’s primary inhibitory neurotransmitter which helps promote feelings of calmness. The specific Bacopa Monnieri Extract used in BRAIN XL contains high amounts of bioactive constituents including Bacosides, which may protect neurons, scavenge free radicals and modulate key neurotransmitters in the brain, thereby improving mood, memory and stress management.†

Shilajit and its main bioactive, Fulvic Acid, have been shown to promote a host of overall health benefits. Recent studies have shown Shilajit to produce significant improvements in passive avoidance acquisition and memory retrieval. Research also shows that Shilajit may help the body fight addiction disorders and prevent certain degenerative diseases of the brain.†

Huperzine A operates as an acetylcholinesterase inhibitor, preventing the breakdown of acetylcholine. This actually *Super-Charges* the Alpha-GPC by promoting longer lasting acetylcholine in the brain, supporting sustained focus and concentration for long periods of time.†

NEURO-GF is an oligopeptide specifically yielding high quality, bioavailable NGF (Nerve Growth Factor). According to newly developed research, NGF is the firstly discovered and best characterized neurotrophic factor, known to play a critical protective role in the development and survival of sympathetic, sensory and forebrain cholinergic neurons. Evidence has shown that NGF possesses potential therapeutic properties on cells of the visual system, cutaneous cells and certain degenerative disorders of the central nervous system.†

+ Q: What makes Brain XL the most effect Nootropic in the world?

A: Unlike any other Nootropic on the market, Brain XL takes a multi-faceted approach to improve both immediate cognitive performance and long-term brain health. Rather than throwing a kitchen sink of ingredients into a proprietary blend, we have hand picked unique ingredients at clinical doses which each serve their very own purpose in improving your productivity output, memory, stress levels and supporting against degenerative brain diseases.

+ Q: What is the most efficacious way to take Brain XL?

A: Users should take 2 capsules of Brain XL, preferably with a light meal, daily. Most users take Brain XL with their breakfast.

A: Brain XL is unique in that it will provide both acute (immediate) and long term benefits. Users will begin to see immediate results within the first day of using Brain XL and will notice even more profound benefits with continued daily use over 30 days.

A: It is not required to cycle Brain XL. In fact, the longer and more consistently you use Brain XL the more effective it works.

+ Q: Can I take Brain XL with coffee or other sources of caffeine?

A: While it is not necessary to take Brain XL with a caffeine source, you can do so if you’d like. Caffeine containing beverages may enhance the effects of Brain XL. Some Brain XL users who consume caffeine regularly note that they do not need or crave as much caffeine as they normally would.