Click the button above and PricePlow will email you with updates from Infinite Labs. 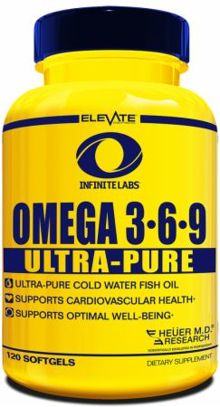 The Elevate Series was developed by one of the premier research medical doctors in the country. Dr. Marvin A. Heuer, M.D. F.A.A.F.P., has practiced medicine for over 30 years with experience in international and domestic clinical research, as well as pharmaceutical and nutraceutical development. With over 300 domestic and international nutraceutical patents and patents-pending, Dr. Heuer has served as Worldwide R&D Director and Vice President for a number of companies in the health industry before partnering with Infinite Labs on the design, formulation and development of the Elevate Series.

A HIGHER LEVEL OF

NO GMO'S OR PRESERVATIVES

Flaxseed is a rich source of minerals, omega 3 fatty acids, phytoestrogens and soluble and insoluble fiber; abundant evidence supports the value of flaxseed.*

Borage oil contains GLA or Gamma Linolenic Acid, which is an omega 6 fatty acid. GLA is an essential fatty acid that our body is not able to synthesize itself. GLA supplementation can support a healthy inflammation response to excercise.*

Omega 6, also known as polyunsaturated fatty acids (PUFAs), are considered essential for health similar to that of omega 3 fatty acids. Along with omega 3 fatty acids, omega 6 fatty acids play a crucial role in supporting brain health, as well as normal growth and development. They support skin and hair growth, maintain bone health, support metabolism and the reproductive system. For general health, there should be a balance between omega 6 and omega 3 fatty acids. The ratio should be in the range of 2:1 - 4:1, omega 6 to omega 3, and some health educators advocate even lower ratios. Based on these studies, in 2009 the American Heart Association recommended human diets to include high levels of n-6 PUFAs that comprise at least 5%–10% of the energy intake10. Consistent with the health claim, a 2003 meta-analysis supported the finding that substitution of saturated fatty acids with vegetable oils rich in polyunsaturated fatty acids, including linoleic acid, supported serum total and LDL cholesterol levels within a normal range11.*

Click the button above and PricePlow will email you with updates from Infinite Labs.