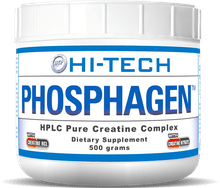 Go to Store
Quick Links to Deal PricesHow does this work and how do stores get listed? See our disclosure below to learn more.
Select Variation(s):
Size
Deal Price
500 Grams
Buy 1 Get 1 FREE
$27.95
BOGO
Go to Store
Go to Store
Compare store prices

In the early 1990s, EAS introduced its original brand of creatine monohydrate and thus sparked the first great revolution into the sports nutrition market. Since the release of Phosphagen, Hi-Tech has worked diligently to develop a creatine product that would represent the same quantum leap in nutritional technology and consumer value that EAS’ Phosphagen did. Hi-Tech understood that to succeed in this mission, it would need to design a sophisticated creatine product that significantly advanced the muscle-building potential of the original Phosphagen. Moreover, Hi-Tech realized that the successful design of such a sophisticated creatine product could take a decade or more of both in-house and independent research and experimentation. Hi-Tech believed that the keys to unleashing the full muscle-building potential of creatine would be to identify (1) other forms of creatine that might be more bioavailable and/or have more valuable muscle-building applications than creatine monohydrate and (2) synergistic compounds that could dramatically enhance the propitious effects of creatine by enhancing creatine’s performance in the phosphagen system.

The term “phosphagen” is synonymous with creatine phosphate, also known as phosphocreatine (PCr), which is a phosphorylated creatine molecule that provides a reserve of chemical energy in the form of high-energy phosphate bonds that can be rapidly mobilized from PCr. Since creatine is the rate-limiting compound in the formation of PCr, a sufficient supply of creatine is crucial to maximize the work performance capability of the phosphagen system, which directly correlates to the ability to enhance muscle and strength.

Hi-Tech knew that it would only be a matter of time before such compounds would be discovered by milestone sports nutrition research. As the years passed, Hi-Tech funded an abundance of its own internal research into the matter; and continued to scour the scientific journals for creatine-based scientific revelations. Hi-Tech finally reached the end of what has been the longest, most exhaustive road of research, experimentation, and product development in the history of the company—the completion of a quest to create a creatine product that would not only live up to the reputation of the Phosphagen name, but that would also take that legendary name to a whole new level of recognition. The result of this quest is a technologically advanced creatine formulation that allows all those who seek to build muscle to capitalize on the potential of a fully charged phosphagen system. Almost exactly twenty years after EAS launched Phosphagen, Hi-Tech is launching a new and improved Phosphagen!

The new Phosphagen optimizes the benefits of creatine supplementation because it doesn’t just stop with incorporating the finest ingredients to enhance creatine availability for utilization in the phosphagen system. The new Phosphagen also incorporates ingredients that create a synergistic effect with creatine by enhancing creatine uptake and by delaying the onset of muscular fatigue during intense muscular contraction, thereby providing the creatine ingredients in Phosphagen with the opportunity to continue to perform longer in the phosphagen system. To ensure an uninterrupted supply of creatine to 1) enhance the anabolic effect of greater muscle cell volumization, including through increased protein synthesis, and 2) heighten and more rapidly mobilize concentrations of PCr muscle fuel to facilitate the rapid and sustained transfer of high-energy phosphate within the phosphagen system for ATP resynthesis, Phosphagen contains the most potent forms of creatine ever discovered: creatine nitrate, disodium creatine phosphate tetrahydrate, creatine phosphate, and creatine HCl. To ensure optimal utilization of creatine by 1) enhancing creatine uptake, and 2) by extending the duration of time in which creatine can continue to energize the work performance capability of the phosphagen system by delaying the onset of muscular fatigue, Phosphagen contains guanidinopropionic acid (a creatine analog), shown to enhance the uptake of creatine into muscle cells due to its insulinotropic properties, and beta-alanine, shown to delay the onset of muscular fatigue through complementary pathways that provide additional time for creatine to contribute to the formation of PCr and resynthesis of ATP, thereby extending the duration and/or intensity of muscular contraction to elicit a greater hypertrophic response. Without the contribution of these synergistic creatine ingredients, the phosphagen system quickly becomes bottlenecked during periods of intense muscular contraction, well before the potential contribution of creatine can be fully realized. Thus, the bodybuilder who wisely chooses Phosphagen over another typical creatine product will have the extra amount of muscle fuel available to complete the one additional rep required to pull the trigger for muscles to grow.

Phosphagen is back to maximize the creatine endgame with renewed thinking outside the creatine box, which represents what creatine supplementation is capable of achieving in its most aggressive and comprehensive form. Phosphagen, by Hi-Tech… more weight… more reps… more muscle!