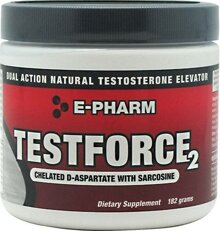 Go to Store
Quick Links to Deal PricesHow does this work and how do stores get listed? See our disclosure below to learn more.
Size
Deal Price
182 Grams
$44.99
Go to Store
Go to Store
Compare store prices
See all E-pharm Products on PricePlow
Ingredients

TestForce2 contains the most soluble form of d-aspartic acid combined with another remarkable amino acid known as sarcosine. This combination provides results clearly superior to other d-aspartic acid product formulations.

In case you aren't aware, d-aspartic acid is the hottest supplement ingredient on the market right now. It has more scientific literature supporting its ability to act as a natural regulator of anabolic hormone (i.e. testosterone, natural growth hormone) release in the body than any supplement ingredient EVER. And E-Pharm was the company to bring you the premium form of d-aspartic acid d-aspartate calcium chelate. This form is more than 75 times as water soluble as regular d-aspartic acid and soluble over a wide pH range. This ensures the most rapid and complete absorption possible.

And now E-Pharm has taken the lead in d-aspartic acid technology again with the patent pending addition of the amino acid sarcosine.

Let's start with some background. When d-aspartic acid (DAA) is ingested it is absorbed into the body and taken up preferentially by endocrine tissues such as the hypothalamus, pituitary, and testicles. There it stimulates the activity of what are known as NMDA receptors. NMDA receptors are located on neurons and they regulate neuronal activity. DAA binds to a specific docking site (receptor) located on the NMDA receptor known as NMDA binding site.

In the hypothalamus the stimulation of NMDA receptors leads to the production of gonadotropin releasing hormone (GnRH). GnRH then stimulates the pituitary gland to release luteinizing hormone (LH) and follicle stimulating hormone (FSH). LH and FSH then in turn travel to the testicles to initiate the process, which leads eventually to the release of testosterone into the blood stream. Stimulation of NMDA receptors in the hypothalamus also leads to the release of natural growth hormone releasing hormone (GHRH) which in turn promotes the release of natural growth hormone from the pituitary gland.

So the key here is the NMDA receptor. The more you activate this receptor in the hypothalamus the greater the release of GnRH and GHRH, and ultimately testosterone and natural growth hormone.

So to review, administration of DAA leads to it's uptake into the hypothalamus and binding to the NMDA receptors there. And to activate the NMDA receptor you also require adequate levels of ligands that bind to the glycine site of the NMDA receptor. Now common sense would lead one to assume that by ingesting supplemental amounts of glycine would ensure that glycine site co-activation is ensured. However the scientific literature has shown that this method has limited efficacy.

The reason that glycine administration is not very effective at stimulating NMDA activity is not completely straight forward, but one reason is because it is efficiently removed from the synapses by the reuptake regulator Glycine Transporter 1 (GT1).

Interestingly, much of the science published on the subject of stimulation of NMDA receptor activity revolves around the theory that NMDA receptor hypo-activity is a causative factor in schizophrenia. For years scientists have been investigating ways to stimulate NMDA activity as a means for treating schizophrenic patients. One of the most effective strategies has been through targeting the GT1 protein. And one of the most efficient means to do this is actually through supplementation with sarcosine.

Of course we aren't concerned about treating schizophrenia here, what we are concerned with is maximally stimulating natural production of testosterone (or natural growth hormone). But the mechanism in question is exactly the same for both purposes. By blocking the re-uptake of glycine you increase the concentration of glycine in neuronal synapses, and therefore increase the influence of NMDA upon nerve transmission. In essence this is the exact way some anti-depressants (such as SSRIs) work, except the goal there is to increase binding and activating of serotonin or dopamine receptors, not NMDA receptors.

Blocking glycine reuptake is not the only mechanism through which sarcosine stimulates DAA activity. Sarcosine actually can itself bind to the glycine binding site of NMDA receptors. In fact, it binds with a higher affinity than even glycine. So basically it replaces glycine as well as serves as its own reuptake inhibitor. It totally solves the glycine co-activation issue in one shot.

Knowing all these facts you can see why sarcosine produces a rather dramatic effect on NMDA neuronal transmission compared to glycine itself, or other endogenous ligands for the glycine receptor such as d-serine. test force2

To summarize, for d-aspartic acid to work to its maximum potential it must be taken with an efficient stimulator of the glycine binding site on the NMDA receptor. The most efficient non-drug stimulator we know of is the natural amino acid sarcosine.

TestForce2 contains 3 grams of d-aspartic acid (as d-aspartate calcium chelate) and 3 grams of sarcosine per serving. It also is flavored with a light fruit punch flavor and slightly sweetened to provide a very pleasurable taste experience. It dissolves almost instantly.