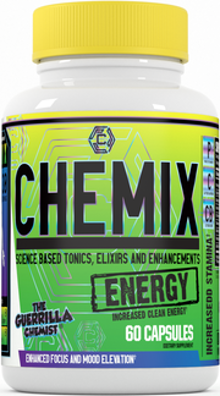 Go to Store
Quick Links to Deal PricesHow does this work and how do stores get listed? See our disclosure below to learn more.
Size
Deal Price
60 Capsules
$44.99
Go to Store
Go to Store
Compare store prices

Go to Store
Chemix ENERGY is an ultra-premium, natural stimulant-based formula that gives users hours of endless energy. Whether it’s for the gym, work, gaming, or staying up, ENERGY combines 8 ingredients in efficacious and synergistic doses to make sure you are mentally firing on all cylinders. Each ingredient was chosen for a very specific purpose and dose to ensure that you get the maximum effect every time.HOW DOES CHEMIX ENERGY WORK?

B-Phenylethylamine: Phenylethylamine, or more commonly known as PEA, is the chemical backbone structure for many central nervous stimulants. PEA is found naturally in a variety of botanicals including Leguminosae and even chocolate. PEA as a supplement hits you hard and hits you quickly. That’s why I front loaded ENERGY with 500mg of it for that initial euphoric and stimulant rush.
Catuabua Bark Extract(std to 30% polyphenols): Catuaba (Trichilium catigua) has been used in traditional Brazilian medicine for memory enhancement and libido support. This compound is a superstar ingredient that not only will give you plenty of energy and focus.

Caffeine Anhydrous/Caffeine Citrate: This formula contains a blend of caffeine anhydrous and citrate. Caffeine, a trimethylxanthine, in general is an adenosine antagonist meaning it blocks the sleepiness action of adenosine. This is what causes the alert feeling you get from caffeine. ENERGY has a total of 267mg of caffeine from the 2 sources, not to overwhelm the other stimulants inside this incredible formula.

Source: INCREASE THE BENEFITS OF CAFFEINE IN ULTRAS 2019

Hordenine HCL: Hordenine is often mislabeled as a stimulant based on its structure, but it’s actually a mono amine oxidase-B inhibitor. Commonly known as N,N-tyramine, one could see how it can be confused with a PEA derivative. Most companies use hordenine completely incorrectly or at too low a dose to be effective. Not me.

N,N-dimethylphenylethylamine citrate: One of the strongest PEA derivatives that is legally able to be used in supplements, N,N-dimethylphenylethylamine citrate has the PEA backbone but with one crucial difference: it contains gemini methyl groups in the Nitrogen atom of the amine group. This allows it to last longer in the body. This will have a similar effect as PEA, but should last longer and hit slightly harder!