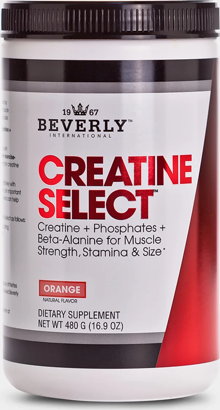 Go to Store
Quick Links to Deal PricesHow does this work and how do stores get listed? See our disclosure below to learn more.
Size
Deal Price
480 Grams
$26.09
Go to Store
Go to Store
Compare store prices
See all Beverly International Products on PricePlow
Ingredients

Pile On The Plates Eith New & Even Stronger Creatine Select!

Newly re-formulated CREATINE SELECT from Beverly International (BI) supports the fastest possible improvements in the appearance and performance of your physique by tackling the principal causes of premature muscle fatigue during resistance exercise.* These causes most commonly result in a decline in muscle force, shortening velocity and power, all of which CREATINE SELECT helps prevent using the most widely studied and bioavailable form of creatine in the world (discussed below) reinforced by B-alanine, electrolyte-bound phosphates and cinnamon bark extract.*

Each ingredient in new CREATINE SELECT has been tested and reviewed for purity and carefully balanced for maximum pharmacokinetic and pharmacodynamic impact. Finally, BI's product development scientists left no stone unturned in making CREATINE SELECT the very best tasting formula of its kind!