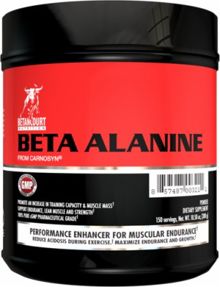 Go to Store
Quick Links to Deal PricesHow does this work and how do stores get listed? See our disclosure below to learn more.
Size
Deal Price
300 Grams
$27.99
Go to Store
Go to Store
Compare store prices
See all Betancourt Products on PricePlow
Ingredients

Beta-Alanine is considered to be the "new creatine" in sports performance; not because it can replace the proven strength/muscle builder, but because it is proven to boost performance and muscular endurance for high intensity exercise. Whereas creatine is considered ideal for boosting absolute strength, Beta-Alanine is considered ideal for the higher intensity rep ranges because of its ability to buffer lactic acid. Beta-Alanine is a non-essential amino acid that is used by muscle cells to synthesize carnosine which functions as a buffer for the hydrogen ions (acid) produced during strenuous exercise, thus helping to maintain optimum muscular pH. Clinical studies suggest that Beta-Alanine supplementation can delay muscle fatigue.*