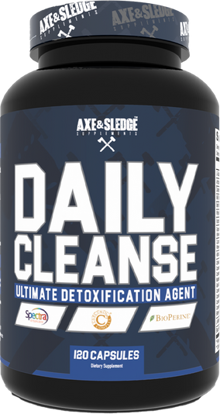 Go to Store
Quick Links to Deal PricesHow does this work and how do stores get listed? See our disclosure below to learn more.
Size
Deal Price
120 Capsules
$35.96
Go to Store
Go to Store
Compare store prices

Toxins are harmful substances that are either produced in the body, found in nature, or made synthetically. High levels of toxins can negatively affect various aspects of health and may lead to a plateau in performance, weight loss, and increase your risk of becoming ill.

Since we are exposed to toxins every day, the body is equipped with a comprehensive detoxification system. Various organs are responsible for detoxifying the body, including the lungs, skin, digestive system, kidneys, and liver. Each organ has its own way of getting rid of toxins. For example, the lungs detoxify the body by removing gases, whereas the kidneys filter toxins out of the blood and into the urine.

Although the body can remove toxins on its own, there are plenty of things that you can do to improve your internal detoxification systems’ efficiency, including:

Beyond the dietary and lifestyle modifications mentioned above, you can also utilize specific supplements to boost your body’s detoxification system. However, the vast majority of products marketed as “detox supplements” hide behind proprietary blends, use low-quality ingredients, and are underdosed. Instead of wasting your time and money on an inferior product, pick up a bottle of Daily Cleanse!

Check out the Ingredient Breakdown section below for more information about the formula!

Improving your body’s ability to remove toxins will not only enhance your health, but will also significantly increase your performance, recovery, and body composition. Add Daily Cleanse to your health supplement stack and we guarantee you will notice a major difference in how you look and feel.

As a dietary supplement, take 4 capsules of Daily Cleanse with 8 oz of water. For best results, consume daily. Users can also take two capsules in the morning and two capsules later in the day if preferred.

Glutathione is a molecule that’s made up of three amino acids, including glutamic acid, cysteine, and glycine. Glutathione is naturally found in some foods and acts as a powerful antioxidant in the human body. Glutathione is considered to be one of the most important molecules in the body because it protects cells from potentially harmful toxins, cellular damage, and oxidative stress.

Several factors can deplete levels of glutathione, including age, stress, pollution, and poor diet. Therefore, supplementing with glutathione maintains the effectiveness of your glutathione system and provides you with several benefits. Not only does glutathione protect cells, but it’s also crucial for optimal immune function.

Dandelion extract (taraxacum officinale) is also considered to be a powerful natural diuretic. In fact, it's been used as a diuretic for centuries in both Ayurvedic and traditional Chinese medicine.

Since dandelion extract is also rich in vitamins and minerals, it can help rid the body of excess water, without depleting electrolyte levels. Dandelion extract primarily carries out its effects by increasing urinary frequency. Moreover, dandelion root has antioxidant, anti-inflammatory, and cardioprotective properties.

Milk Thistle is a plant that contains a high amount of plant compounds called silymarin, which possesses anti-inflammatory, antioxidant, and anti-viral properties. Milk thistle also has powerful hepatoprotective effects. Some evidence suggests that it may reduce damage to the liver caused by free radicals.

This enables blood, nutrients, and oxygen to be transported to the working muscles more efficiently. Supplementing with beet root may promote cardiovascular health, improve recovery, and enhance performance.

Burdock root is a plant that’s primarily found growing in Europe and the Northern parts of Asia. Similar to the other plant extracts in Daily Cleanse, burdock root extract is an antioxidant powerhouse.

It specifically contains high levels of phenolic acids, luteolin, and quercetin. Burdock root has traditionally been used to improve digestion and as a natural diuretic. However, some evidence suggests that burdock can assist in the removal of toxins from the blood.

As the name suggests, grape seed extract is produced by removing seeds from grapes, letting them dry out, and grinding them into a fine powder. Grape seeds are incredibly rich in antioxidants, including flavonoids, phenolic acids, and anthocyanins.

However, they are most known for their proanthocyanidin content.

Proanthocyanidins are a class of polyphenols that are naturally found in fruits and offer numerous health benefits. Due to its rich phytochemistry, grape seed extract has the potential to decrease oxidative stress, reduce inflammation, and promote cardiovascular health.

Curcumin C3 Complex is standardized to contain at least 95% curcuminoids, is rigorously tested for safety, purity, potency, and efficacy, and has numerous scientific studies supporting its abundance of health benefits. Supplementing with curcumin reduces several markers of inflammation and increases the body’s endogenous antioxidant levels.

Alpha-lipoic acid (ALA) is a naturally occurring compound that’s produced by the body. It’s also found in some foods, such as red meat. ALA has powerful antioxidant and anti-inflammatory properties, but it’s also heavily involved in energy production.

Furthermore, ALA may be able to enhance the body’s response to its own insulin, thus naturally lowering blood sugar levels.

Supplementing with ALA may:

Spectra is a patented ingredient developed by FutureCeuticals that consists of 29 different vegetables, fruits, and herbs. Spectra is an antioxidant powerhouse that’s been shown to inhibit free radical production and optimize cellular metabolic activity within the body.

So far, there are five major types of free radicals that exist in the body and Spectra was specifically formulated to target all of them, making it a full-spectrum antioxidant formula. Spectra also supports the immune system, energy production, and athletic performance.

L-methionine is a sulfur-containing essential amino acid. Since the body cannot produce methionine on its own, it’s incredibly important to consume methionine-rich foods and/or supplements on a daily basis. Methionine plays a crucial role in the metabolism of fats and the excretion of heavy metals.

It’s also a powerful antioxidant and assists in the growth and repair of body tissue. What’s more, methionine facilitates the body’s detoxification process. So without enough methionine, you’re not going to be able to excrete toxins as efficiently.

BioPerine is a patented black pepper that’s standardized to contain at least 95% piperine, which is the main bioactive constituent. BioPerine improves the effectiveness of Daily Cleanse by enhancing the bioavailability and absorption of the entire formula. BioPerine achieves its effects by inhibiting specific enzymes that metabolize nutrients and proteins that contribute to the first-pass effect.

Since some dietary ingredients aren’t readily absorbed by the small intestine, we included BioPerine to help you get the most out of Daily Cleanse. BioPerine was also developed by Sabinsa Corporation and is primarily used to increase the absorption & bioavailability of curcumin.