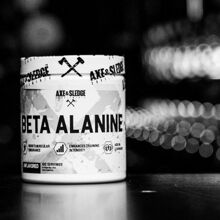 Go to Store
Quick Links to Deal PricesHow does this work and how do stores get listed? See our disclosure below to learn more.
Size
Deal Price
200 Grams
$16.16
Go to Store
Go to Store
Compare store prices

Although Axe & Sledge offers comprehensive supplements that cater to the majority of people’s needs, we understand that everyone is different.

So we created a line of products that gives every hard-working M’fer more options and flexibility. Tailoring a supplement stack to your individual needs will help you reach your health and fitness goals even faster.

Beta-alanine is a non-essential amino acid that’s naturally produced by the body and found in some foods, such as fish, poultry, and meat. Unlike most amino acids, beta-alanine is not used for protein synthesis. Instead, it’s used alongside histidine to create carnosine — a dipeptide molecule that’s highly concentrated in skeletal muscle. Carnosine is a powerful lactic acid buffer, meaning that it helps reduce lactic acid levels.

Lactic acid is a metabolic by-product that’s produced from the energy systems during the generation of adenosine triphosphate (ATP). If you’ve even exercised to fatigue and felt a burning sensation in your muscles, that’s a result of lactic acid build-up. Not only is lactic acid build-up uncomfortable, but it also significantly reduces your body’s ability to regenerate cellular energy that’s required for maximal performance.

The most effective way to elevate carnosine levels is by supplementing with beta-alanine on a daily basis. Although the majority of pre-workouts already contain beta-alanine, it’s likely more beneficial to take beta-alanine on rest days as well as training days. So having a standalone beta-alanine supplement on hand is suggested to maximize its effects. It’s recommended to take anywhere between 2 and 5 grams of beta-alanine per day.

Supplementing with beta-alanine may:

It’s important to note that a common side effect of beta-alanine supplementation is tingling in the skin, also known as paraesthesia. If you experience this effect, don’t be alarmed. It’s harmless, temporary, and should subside with extended use. To avoid paresthesia, you can try dividing the suggested dose and consuming 4 to 6 hours apart. Another option is to consume beta-alanine with food.

Beta-alanine has an abundance of research showing it’s a safe and effective ergogenic aid. Not to mention, beta-alanine also has antioxidant, anti-aging, and immune-boosting properties.

Basics Beta-Alanine can be taken on its own, but it stacks well with the following supplements:

You can also get the Basics Series Stack for a discounted price!