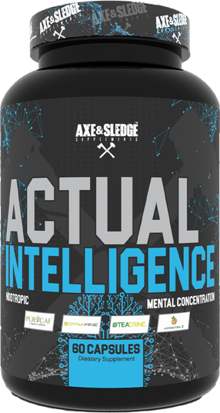 Go to Store
Quick Links to Deal PricesHow does this work and how do stores get listed? See our disclosure below to learn more.
Size
Deal Price
60 Capsules
$44.96
Go to Store
Go to Store
Compare store prices

Let’s face it, we only spend so much time in the gym, so it’s beneficial to find supplements that improve your performance in other areas of your life. Especially since the vast majority of our lives are spent at work, school, and home. Not to mention, a true hard-working M’fer is someone who excels inside and outside of the gym.

When most people think of nootropics, the first thing that comes to mind is typically caffeine. However, there are a lot of other ingredients that can further boost your cognitive performance. And those with the most scientific backing are found in Actual Intelligence.

Actual Intelligence (also known as A.I.) is a powerful nootropic fit for a true hard-working M’fer that wants to maximize their productivity and performance beyond the walls of the gym. Actual Intelligence uses effective doses of ten ingredients, which have been rigorously tested and shown to boost focus, mental energy, mood, cognition, and alertness.

Actual Intelligence is one of the only nootropics that uses four patented ingredients, including:

If you’ve been searching for a product that can help you reach a flow state of mind, get sh*t done, and support your brain health, look no further than Actual Intelligence from Axe & Sledge.

Lion’s mane, also known as Hericium erinaceus, is a medicinal mushroom that belongs to the tooth fungus group. Lion’s mane is most commonly found in regions of Asia, Europe, and North America. Lion’s mane is known for growing long spines that appear in clusters. To some, its shape resembles an actual lion’s mane, which is where Lion’s mane gets its name from.

Beyond its unique name and physical appearance, Lion’s mane is rich in several beneficial constituents, such as beta-glucans, heteroxylans, heteroglycans, hericenones, and erinacines. These bioactive compounds are largely attributed to Lion’s mane’s numerous benefits.

Supplementing with Lion’s mane may:

What’s more, studies have shown that L-theanine works synergistically with caffeine to boost cognitive function and attention. L-theanine carries out its effects by increasing the body’s production of a neurotransmitter called gamma-aminobutyric acid (GABA).

PurCaf is an organic form of natural caffeine that’s derived from green coffee beans. PurCaf is standardized to contain at least 95% caffeine, so every serving of A.I. contains approximately 95 milligrams of caffeine. Anecdotally, natural caffeine provides users with a more steady, yet sustained increase in both physical and mental energy.

Alpha-glycerylphosphoryl choline (Alpha-GPC) is a cholinergic compound that possesses powerful cognitive-boosting properties. As the name suggests, alpha-GPC is made up of two components — a glycerophosphate molecule and a choline molecule.

The glycerophosphate component of alpha-GPC supports the structure of cellular membranes, which is an added benefit that’s not offered by other supplemental forms of choline. Studies show that supplementing with alpha-GPC may improve cognitive function, reduce the rate of cognitive decline, and enhance power output.

Overall, alpha-GPC is a phenomenal supplement for supporting brain health and boosting both cognitive and physical performance.

Dynamine is a trademarked form of methylliberine, a purine alkaloid that’s naturally found in kucha tea leaves. Dynamine is known for its ability to quickly increase energy levels, focus, and mood. Studies have shown that Dynamine carries out its effects by activating dopamine receptors and inhibiting adenosine receptors.

Dopamine is a neurotransmitter that heavily influences your mood, motivation, memory, focus, and executive functioning. Adenosine, on the other hand, is an organic compound that causes a decline in neural activity, resulting in mental fatigue.

Therefore, by increasing dopamine production and inhibiting adenosine, Dynamine is capable of improving energy, alertness, productivity, and motivation. Not to mention, Dynamine doesn’t appear to impact your cardiovascular system, so it’s unlikely to cause rapid heart rate, high blood pressure, or other unwanted side effects. Dynamine was developed by Compound Solutions.

Furthermore, some studies have shown that TeaCrine and caffeine are complementary, meaning that caffeine increases the bioavailability of TeaCrine, resulting in better effects. TeaCrine’s half-life is approximately four times greater half-life than caffeine, so it has longer-lasting effects.

Due to Advantra Z’s ability to increase energy, reduce appetite, and boost thermogenesis, it’s often used in weight loss supplements and pre-workouts. However, we included Advantra Z in Actual Intelligence to curb your appetite, further increase energy levels, and enhance concentration. Advantra Z is a branded ingredient developed by Innophos.

Toothed clubmoss, more commonly known as Huperzia Serrata, is a plant that’s rich in huperzine A, a natural inhibitor of acetylcholinesterase. Huperzine A is capable of sustaining acetylcholine levels by reducing the breakdown of acetylcholine.

In regards to Actual Intelligence, huperzine A works synergistically with alpha-GPC to not only raise acetylcholine levels but keep them elevated for an extended period of time. Supplementing with huperzine A additionally increases focus, mind-to-muscle connection, and cognitive performance.