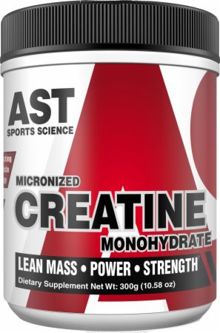 Go to Store
Quick Links to Deal PricesHow does this work and how do stores get listed? See our disclosure below to learn more.
Size
Deal Price
1000 Grams
$25.71
Go to Store
Go to Store
Compare store prices
See all AST Products on PricePlow
Ingredients

AST Sports Science Micronized Creatine is a new creatine supplement that incorporates state-of-the-art particle micronizing technology (PMTTM). This technology sets a new standard for creatine supplementation by actually producing creatine ‘micro-particles’ that are 20 times smaller than regular creatine powder. It mixes instantly in liquid and stays suspended longer. It has no gritty mouth feel and is easy on the stomach. AST Micronized Creatine is the best creatine monohydrate supplement for fast and effective results.

You have liquid creatine, creatine candy, creatine nitrate, creatine ethyl ester, and even stomach-bloating effervescent creatine (Give this a try, I guarantee you’ll only do it once!). With all these “tricks” thrown at trying to market a “different” creatine – nothing has actually improved upon the effects of creatine monohydrate. In fact, no other creatine of any kind has been proven as effective as creatine monohydrate. That’s a scientifically proven fact!

The problem is, companies are trying too hard to make their creatine different instead of developing a creatine that is actually better. In doing so, some are even selling outright fraudulent products. Where creatine is concerned, buyer should definitely beware! As you may or may not know, creatine monohydrate will not fully dissolve in liquid. That’s why you always get that gritty sand at the bottom of the glass. Look at it this way, if it falls like sand to the bottom of your glass what does it do in your stomach? Maybe that explains why so many complain of stomach discomfort when using regular creatine monohydrate.

With AST’s constant commitment to improve the effectiveness of sports supplementation we have developed a new creatine supplement that incorporates state-of-the-art particle micronizing technology (PMTTM). This technology sets a new standard for creatine monohydrate supplementation by actually producing creatine ‘micro-particles’ that are 20 times smaller than regular creatine powder.

Regular creatine monohydrate sits in the gut longer. This causes discomfort to many
users. AST’s Micronized Creatine goes into solution better and is absorbed quicker
causing no stomach upset.*

Creatine works by enhancing muscle cell hydration. It is very important to consume adequate fluids while taking creatine to see best results. A good rule of thumb is to drink an EXTRA 16 to 20 ounces of liquid for every 5 grams of creatine you take. During your Loading Phase you should be drinking an EXTRA 64 to 80 ounces of liquid than you normally drink. During the maintenance phase you should drink an EXTRA 32 to 40 ounces. This is very important and ensures you get the maximum out of creatine supplementation.*