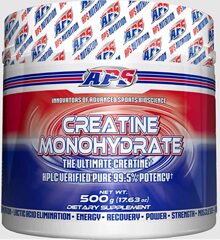 Go to Store
Quick Links to Deal PricesHow does this work and how do stores get listed? See our disclosure below to learn more.
Size
Deal Price
500 Grams
$9.86
Go to Store
Go to Store
Compare store prices

Short term supplementation of creatine has been shown to significantly increase muscular performance. It may help athletes work out at a higher intensity during resistance exercise. A resulting greater training stimulus over time may result in enhanced physiologic adaptations. In the body, creatine helps to regenerate ADP (spent energy) back into ATP for increased energy output involving short, intense bursts of energy.

Creatine is a natural substance that is synthesized in the body from three amino acids, Arginine, glycine and methionine. It's also found naturally in certain foods. This Creatine is manufactured in Germany under U.S. Patent No. 5,719,319. This patented manufacturing processes eliminates unwanted by-products often found in lesser quality creatine. Inferior raw materials and manufacturing processes that are not continuously monitored or adapted to the product result in impurities such as creatinine, dicyandiamide, dihydrotriazine and if so thiourea. CreaPure, manufactured by AlzChem AG, is the only creatine made in Germany. This creatine is known around the world for its high quality and purity, which is due to our careful selection of raw materials and our technologically mature, patented system for synthesizing creatine.

Creatine is the non-essential amino acid that is an important source of chemical energy for muscle contraction. Once creatine reaches the muscles, it's converted into Phosphocreatine (creatine phosphate), and ultimately becomes the body's primary energy source-adenosine triphophate. In your skeletal muscles, where you build milk and generate the energy for movement, creatine participates in the complex muscle contraction process to maximize muscle energy. Adenosine Triphosphate, abbreviated to ATP, is a key fuel for muscle contraction, the repetition exercises you perform when bodybuilding. The more ATP you make available to your muscles the more energy created to power bodybuilding and boost performance in bursty sports, like sprinting, rowing, bodybuilding. Normal levels of ATP allow you only a few seconds of high intensity energy.

Although creatine's role in the energy production process is its most notable trait, there is evidence that creatine can stimulate muscle growth. It does this is a couple of different ways. By allowing you perform more work as a result of additional energy, increased protein synthesis is stimulated. Secondly, when an abundance of creatine phosphate is stored in the muscle, the muscle will hold more water in its cells and become what is known as "volumized" or "super-hydrated." The more volumized a muscle is, it will promote the synthesis of protein as well as deter the breakdown of protein. Volumizing the muscle will also create an environment where an increased level of Glycogen synthesis will take place. Increased protein synthesis along with training will lead to muscle growth. This is also scientific evidence that shows supplementation with creatine causes muscle tears to repair themselves quicker. The conversion of ADP to ATP takes place inside the mitochondria. These tiny "power plants" that convert energy. The mitochondria are where cellular respiration takes place, which is the process that generates the fuel that our cells use as energy.

During resistance training, the glycogen breakdown process has a side effect of the development of lactic-acid. This is the substance that is responsible for the intense burn that is felt during exercise and the fatigue of the muscle. Creatine phosphate act as a "buffer" to lactic acid build up. As mentioned earlier, creatine phosphate aids in the production of ATP. This process consumes large amounts of hydrogen ions which are leased lactic acid and build in muscle cells during intense exercise. These excess hydrogen ions interfere with muscle contractions, but creatine phosphates "Buffering" action helps to delay fatigue allowing for longer workouts.