Click the button above and PricePlow will email you with updates from AOR. 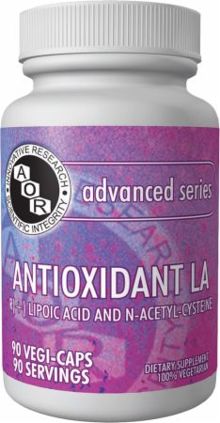 Free radicals are waste products that are unfortunate natural by-products of cellular metabolism. R(+) lipoic acid is naturally produced in the body and is found right inside the cellular powerplant known as the mitochondria where free radicals are produced. R+ lipoic acid provides protection to cells both inside and out and may also help reduce the effects of free radicals.* NAC is a highly efficient form of cysteine and has a number of health benefits. Cysteine is the most important precursor for glutathione (GSH), one of the body's hardest working antioxidants. R+ Lipoic acid and glutathione recycle each other and other antioxidants, keeping them fighting off free radicals longer.*

Kill Two Birds with One Stone

R+ lipoic acid and NAC tend to be very short-lived in the blood. Antioxidant LA is specially formulated to ensure greater stability and accessibility to the body than conventional NAC and lipoic acid supplements.* It is designed to extend the availability of these nutrients, providing continuous support against free radicals and supporting other health benefits.*

NAC may contribute to supporting cardiovascular health.* Both NAC and lipoic acid are suggested by some studies to help support heart health.*

Both NAC and lipoic acid may support the health of the liver and body detoxing.*

Lipoic acid is suggested to help support blood sugar and insulin activity already in healthy range.* As an antioxidant, it may help support nerve health, especially since the R+ form of lipoic acid crosses the blood-brain barrier.*

Lipoic acid has a very short half-life, or time to peak activity, of about 22 minutes. This means that even if you take a high dose all at once, you'll get lots of antioxidant protection, but only for a short time. For NAC, although its half-life is about 2 hours, most of the NAC consumed gets used up by intestinal cells and the liver first, leaving little to support GSH production and antioxidant activity. A long-acting formula such as Antioxidant LA overcomes such issues, providing effective health benefits and antioxidant support around the clock by increasing the availability of these two powerful nutrients.*

Click the button above and PricePlow will email you with updates from AOR.