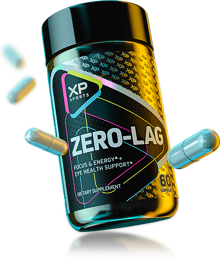 Go to Store
Quick Links to Deal PricesHow does this work and how do stores get listed? See our disclosure below to learn more.
Size
Deal Price
60 Capsules
$14.24
Go to Store
Go to Store
Compare store prices
See all XP Sports Products on PricePlow
Ingredients

Level up your game! XP Sports Zero-Lag delivers key ingredients that have been scientifically studied and shown to support mental focus for enhanced performance and increases in energy and alertness. What’s more? The formula also contains a compound that plays an important role in supporting healthy eye function.*

THE ELEMENTS OF PLAY

Zero-Lag delivers a unique combination of ingredients, including a 2:1 ratio of instant to sustained-release caffeine, a compound which has been shown to support mental focus for enhanced performance and increases in energy and alertness. It also contains FloraGLO Lutein.*

XP Sports was created for the esports community, where competition is relentless and the margin for error is razor thin. A split-second decision can mean the difference between winning and losing, first or second — kill or be killed. That’s where XP Sports thrives.