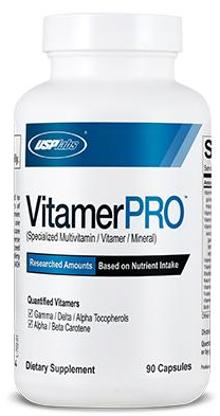 Go to Store
Quick Links to Deal PricesHow does this work and how do stores get listed? See our disclosure below to learn more.
Size
Deal Price
90 Capsules
$25.73
Go to Store
Go to Store
Compare store prices

Vitamer PRO was formulated to support you during the times:

In other words – the goal of Vitamer PRO is to adjust to your lifestyle as multi's were originally intended to do!

While you may have a daily routine, certainly your life changes from week to week, month to month and year to year.You eat more of certain foods at different times and also face additional challenges (often without warning). Your body is always trying to adapt so shouldn’t your multi help support your lifestyle instead of just throwing gasoline on the fire, so to speak, by providing a heaping amount of a few select vitamins and/or minerals?

OK, so it’s very clear by now we feel, based on the research we reviewed, that a proper multi should have amounts of various vitamins and minerals that allow you to stay within an acceptable range of intake without insanely high amounts of any one particular vitamin or mineral.

The word vitamin is often confused as being a particular molecule, but it is in fact a description of activity.Vitamers are the molecules which have that activity. In other words, vitamers have the vitamin activity or function.

In recent times d-alpha-tocopherol (notice “d”, no “dl” as the “dl” is nowhere near as common as it once was) seems to be the most widely used form of Vitamin E in multis.However, this approach is flawed as just using one vitamer is not how they are consumed in foods and may be creating an imbalance between the vitamers (This is starting to become a theme, isn’t it?) For example, d-alpha-tocopherol has been shown to deplete gamma-tocopherol in plasma and tissues with high consumption.

This is yet another example where consuming one vitamer in excessive quantities may end up doing more harm than good.

Instead, one should try to consume a mixture of tocopherols, as close as possible to a mixture found in foods.This would include consumption of not only alpha and gamma-tocopherol, but beta- and delta-tocopherol as well. For example, a 100 g serving of almonds can contain around 24.3 to 25.87 mg of alpha-tocopherol,

Instead, we must attempt to truly supplement the diet, not replace or exceed realistic intake levels.

For example, even those products that contain 200 IU of alpha-tocopherol (equivalent to 134 mg alpha-tocopherol) would require one to consume around three quarters to over 1 lb. of even some of the richest sources of the vitamin, including almonds.

I don’t know anyone who eats a pound of almonds a day, do you? Clearly, even when those people in the U.S. who are in the 90th percentile for vitamin E consumption from food sources are only consuming around 10-11 mg, supplementing with large doses of vitamin E seems excessive. The goal should be to reach an adequate level, not consume excessive quantities that may provide no greater benefit and may actually be harmful.

Vitamer PRO is the only multi we know of that lists how much Gamma-, Delta- and Alpha-Tocopherols it contains!

It’s likely that you’ve heard beta-carotene being praised, such as early observational data showing an association between high beta-carotene levels and good health, as well as an association between low beta-carotene levels and poor health. It was because of this observation that some speculated that supplementing with beta-carotene could produce positive effects upon health. Since that early observational data, interventional studies using mega-doses of beta-carotene either failed to show a positive benefit or, in some instances, showed detrimental effects upon health which some scientists have indicated may be a result of the excessively high doses used in such studies. While such results are not definitive, we again believe it’s best to err on the side of caution and avoid using excessively high amounts of beta-carotene.

Yet, another example of more NOT necessarily being better: Aside from the notion that high carotenoid (and other micronutrients) plasma levels may simply be a marker of good health (e.g., indicative of high consumption of fruits and vegetables and perhaps associated with other positive lifestyle factors), rather than the cause of it, some have also hypothesized that this discrepancy may be due to the high doses of beta-carotene used, possibly causing suppression of other carotenoid levels in tissues. Clearly, it doesn't appear to be optimal for your daily multi to contain obscenely high amounts. Luckily, Vitamer PRO has you covered! Eating foods like fruits and vegetables provides carotenoids in a mixed fashion, with several, not simply one such as beta-carotene. While nothing will replace the consumption of fruits and vegetables, a multi-vitamin should attempt to be representative of what is found in healthful foods. For example, a carrot contains beta-carotene, alpha-carotene and lutein. When it comes to a multi-vitamin/mineral formula, it’s just as important to include supplemental amounts that are helpful for those that may not eat the best diet, yet this formula shouldn’t contain excessive quantities which could be harmful. Vitamer PRO includes beta and alpha carotene as well as lutein, zeaxanthin and lycopene! A Good Multi Should Be Graded On What It Has, But Also On What It Doesn’t Have

Vitamer PRO chooses to exclude chromium in the formulation as the available data indicate that net chromium balance is maintained with exercise, because while an increase chromium excretion is seen, a compensatory increase in absorption also occurs. In addition, some scientists have expressed concern that the form of chromium used in supplements may lead to accumulation in the body, while others have noted that it may possess potential genotoxic effects. Furthermore, some scientists have called into question the entire notion that chromium is an essential trace element for humans, arguing that such a notion is based upon flawed animal data.

Furthermore, the lack of evidence showing a need for iron supplementation in resistance training men and the potential for increased risk of certain diseases with excessive iron intake, led us to conclude that supplemental iron wasn’t a proper addition to a men’s multivitamin formula. While exercise training is known to reduce serum ferritin (blood iron) levels in men with normal levels, levels generally still remain in the normal range. In addition, a recent study found that in recreationally active men, a 37 mg dose of elemental iron led to greater oxidative stress from exercise-induced muscle damage.

With respect to women who menstruate regularly and thus lose blood regularly, they may benefit from a reasonable amount of iron included in a multivitamin/mineral supplement, especially when considering their higher iron requirements compared to men. While a diet rich in iron is always preferable to supplementation, some may not consume sufficient quantities. This is why iron is included in Vitamer PRO for Women. It’s important to note that because different variables can alter iron status, women using any iron-containing supplement should be monitored regularly by their physician to determine the adequacy of iron intake.

While some individuals could use additional calcium in their diet, Vitamer PRO doesn’t include supplemental calcium (with the exception of very small amounts of calcium salt for some vitamins in the formula) as there has recently been some controversy in the scientific community as to whether or not supplemental calcium is a proper choice for everyone.

Therefore, until this matter is cleared up, individuals not currently meeting the RDA for calcium should discuss with their physician.

“I’m An Athlete - I Workout A Lot So I Want Very High Amounts Of Vitamins To Replace What I Sweat Out!”

While it’s true that some vitamin and mineral losses can occur in the sweat, these amounts are often rather small and do not justify using mega-doses of vitamins and minerals. Vitamin B6 makes for an excellent example, as many multi-vitamin products on the market have very large quantities of this vitamin.

Yet, even in athletes who have run a marathon only lost an average of approximately 1 mg!

Thus, very little is needed to replace possible losses even from extremely exhaustive exercise and doesn’t warrant mega-dosing. Similar results have been shown for various elements including zinc, iron and copper, where sweat losses are typically only a small percentage of the RDA. The research simply doesn’t support the need for athletes to consume extra vitamins & minerals if they’re on a well-balanced diet with sufficient calories.Large quantities of vitamins/minerals do not seem to impart any benefit with respect to exercise performance when compared with a normal intake.

Furthermore, while not a universal finding, excessive intakes of some vitamins may actually reduce some of the adaptive effects of exercise, although some have characterized these effects as “minimal”. It appears that whether such supplementation, helps, hinders or does neither may depend upon many variables such as the type of training and the individual... Nonetheless, the chronic consumption of a high-dose of some antioxidant vitamins (e.g., in a multivitamin) for all individuals without any other consideration is unwarranted.

Experts have generally recommended against such supplementation and have instead recommended the consumption of antioxidant rich foods.

Top 5 Reasons Why Vitamer PRO Should Be Your Multi

1. Amounts Based On Estimated Intake Levels

3. No Iron (for men), Chromium or Calcium

Each bottle of Vitamer PRO is a 30-day supply.

No horse pills, no huge packs of pills, no nasty teeth-staining powders.