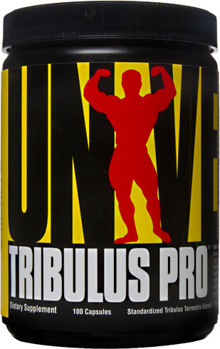 Go to Store
Quick Links to Deal PricesHow does this work and how do stores get listed? See our disclosure below to learn more.
Size
Deal Price
100 Capsules
$9.32
Go to Store
110 Capsules
$12.64
Go to Store
Go to Store
Compare store prices
See all Universal Products on PricePlow
Ingredients

Eastern Europeans know something about “underground” performance supplements. Think of androstenedione, for example. For over thirty years, one of their best kept secrets has been a seemingly innocent herb called Tribulus terrestris L. Found natively in Bulgaria, this peculiar herb contains some interesting phytochemicals that can benefit any bodybuilder or competitive athlete. What are these phytochemicals? Steroidal saponins. These steroidal saponins found in tribulus have been used by the world-class Bulgarian powerlifting team for record lifts. Researchers believe that the steroidal saponins in tribulus might have a stimulating effect on luteinizing hormone (LH), a gonad-stimulating hormone which can positively affect testosterone production. For every possible competitive edge, use Tribulus Pro.*

PricePlow relies on pricing from stores with which we have a business relationship. We work hard to keep pricing current, but it is possible that you might find a better offer on your own. Additional shipping and taxes may apply. Data may be mismatched or out of date.