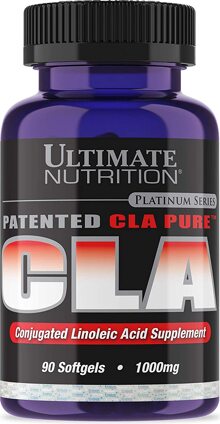 Go to Store
Quick Links to Deal PricesHow does this work and how do stores get listed? See our disclosure below to learn more.
Size
Deal Price
90 Softgels
$12.99
Go to Store
Go to Store
Compare store prices
See all Ultimate Nutrition Products on PricePlow
Ingredients

CLA - Conjugated Linoleic Acid - is not a new discovery as some magazines would have you believe. However, a better understanding of its effects are leading to potential applications that are extremely new and exciting. CLA was discovered by accident in 1978 by Michael W. Pariza at the University of Wisconsin while looking for mutagen formations in meat during cooking.

Although all the intricacies of CLA are not fully understood, it is widely accepted in the research community that CLA counterbalances the negative effects of linoleic acid and regulates fat and protein metabolism in animals. Pariza, director of the Food Research Institute at the University of Wisconsin said, "growing body of data indicates that CLA is a newly recognized nutrient that functions to regulate energy retention and metabolism".*

CLA occurs naturally in foods such as milk, cheese, beef, and lamb as well as many processed foods. One processed food in particular that's high in CLA is Cheez Wiz. But getting enough CLA from your diet for the preferred benefit would require considerable intake of these types of foods. This is not only impractical, but would also have a seriously negative impact on your metabolism due to the high caloric penalty you would pay.