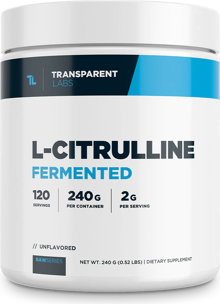 PRODUCT OVERVIEWL-Citrulline is a non-proteinogenic amino acid that was first discovered in the rind of watermelon in the early 1900s. It has a well-characterized role in the urea cycle and the synthesis of nitric oxide, the latter of which is responsible for its blood flow-promoting properties and ergogenic effects. Supplementing with L-citrulline has been shown to significantly increase oxygen uptake, improve hemodynamics, and promote a positive nitrogen balance during intense exercise, all of which are conducive to athletic performance, recovery, strength, and muscle fullness [1]. In contrast to citrulline malate, the citrulline salt of malic acid, this supplement contains pure L-citrulline powder in its native amino-acid form.