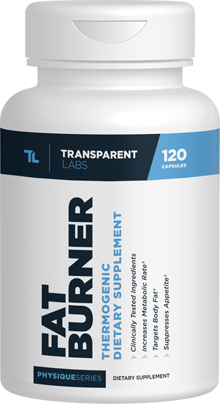 Go to Store
Quick Links to Deal PricesHow does this work and how do stores get listed? See our disclosure below to learn more.
Size
Deal Price
120 Capsules
$46.75
Go to Store
Go to Store
Compare store prices

The truth is... There are only 3 ways to actually expedite fat loss:

A great fat burner will help you accomplish all 3 criteria.

Similarly, ingredients like HTP-5 have been proven to be highly effective at suppressing appetite and hunger cravings.

L-Tyrosine, L-Theanine, and Salicin, with synergistic effects to Green Tea Extract and Synephrine, are designed to reduce mental and physical stress, curb energy “jitters”, and increase the effects of thermogenesis.

PhysiqueSeries Fat Burner is perfect for:

*Ingredient quantities listed below are reflected as "daily" serving.

Green Tea has demonstrated a long history of beneficial effects on the body, and aiding fat loss is one of them. There are several components of green tea that assist in fat metabolism, Epigallocatechin Gallate (EGCG) is the most predominant and sought after:

The active form of tyrosine, L-Tyrosine is a potent anti-stress amino acid with several roles in the body. Specific to its inclusion in PhysiqueSeries Fat Burner, L-tyrosine reduces stress while dieting to improve outcome and experience.

L-Theanine is a naturally occurring amino acid commonly found in green tea alongside EGCG. This amino acid has a wide range of benefits and uses on the body, ranging from fat loss to stress release.

Caffeine Anhydrous is the pure version of caffeine. While caffeine is most commonly used for energy, this popular ingredient also has very effective fat burning properties when applied in ethical dosages.

White Willow bark extract is the natural source of Salicin, a compound that is converted to salicylic acid in the body. Salicylic acid is the same compound responsible for aspirins beneficial effects. More so, this

Cayenne pepper extract is the premier fat burning ingredients containing capsaicinoids. These capsaicinoids are believed to support weight loss through increased thermogenesis and lipolysis (using fat as energy). Capsaicinoids are supported by over 90 clinical studies.

Sourced from the bitter variety of citrus fruits, Synephrine HCl is a potent and unique fat burner. Synephrine provides the gold standard of synephrine extracts, supported by over 30 clinical studies demonstrating its safety and efficacy for weight loss. Synephrine HCl's method for weight loss is via increasing the body’s resting metabolic rate.

Q: What is PhysiqueSeries Fat Burner?

A: Descriptions of what each ingredient does are located in the drop downs above. But in short, PhysiqueSeries Fat Burner optimizes weight loss results by increasing your basal metabolic rate, thereby increasing your overall energy expenditure, allowing you to burn more calories throughout your day.

Q: Can PhysiqueSeries Fat Burner be taken with other supplements?

A: Yes, it can be taken as part of a stack like our PreSeries, ProteinSeries, and StrengthSeries products. *Know your caffeine tolerance when taken in conjunction with any other stimulant-based supplement.

Q: When is the best time to take PhysiqueSeries Fat Burner?

A: Take 1-2 capsules, twice daily between meals. Take 1 serving first thing upon waking in the morning. If you are sensitive to caffeine, do not take within 6 hours of bedtime.

A: Dietary supplements are not subject to FDA approval and undergo FDA review only if new ingredients are introduced. The manufacturer is responsible for testing the safety and effectiveness before marketing a dietary supplement. PhysiqueSeries Fat Burner meets are FDA regulations and quality standards for dietary supplements.

Q: How much should I take?

A: Take 1 capsule, twice daily between meals (1 serving first thing in the morning), to assess caffeine tolerance. Then, increase to 2 capsules, twice daily. If you are sensitive to caffeine, do not take within 6 hours of bedtime.

Q: Are there side effects to PhysiqueSeries Fat Burner?

A: As with all supplements, side effects are dependent on the individual. The nature of a supplement is to provide the body with natural nutrients that enhance natural processes. Therefore, negative side effects are rare. However, due to having caffeine, this supplement can possibly induce an increased heart rate and “jittery” feeling due to increased energy. In very rare events, such supplements may induce nausea. Do not take if pregnant or nursing. Consult a physician before use.

Q: I am subjected to drug testing for my sport, can I take PhysiqueSeries Fat Burner?

Q: I don't live in the United States, can I still buy PhysiqueSeries Fat Burner?

Q: Does Transparent Labs ship to my country?