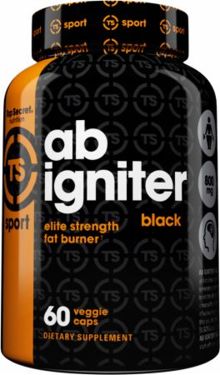 Crash-less Energy Blend - Nobody wants a boost of energy followed by a major crash. Ab Igniter Black contains a natural botanical for time-released caffeine (anhydrous and guarana), which delivers a big-time bump in energy with a soft landing.*

Heat Igniter - Thermogenesis is the creation of heat, and during this process, we burn calories. The ingredient responsible for this act is capsiate, from the capsinoid family of compounds. Capsiate is found naturally in chili peppers, which has been connected to increasing both metabolism and energy output. With Ab Igniter Black, you get all the benefits without the fiery taste or burn.*

Fat Blasting Duo - Fat loss has to occur on a cellular level. Ab Igniter Black has Nelumbo necifera (lotus flower) and Yohimbine hyrdrocholoride to make this happen. Working together, they target receptors that influence fat gain and release from cells.*

Mood and Focus Booster - Let’s face it, when you’re on a diet, it can be hard to focus and enjoy life when you’re dealing with calorie restrictions. With Ab Igniter Black, everything changes. We’ve included two of the most powerful mood boosters and focus promoters – Alpinia galanga and Huperzine. Now you can feel great when you diet.*