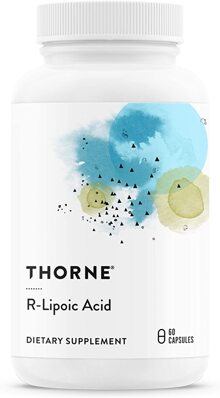 Go to Store
Quick Links to Deal PricesHow does this work and how do stores get listed? See our disclosure below to learn more.
Size
Deal Price
60 Capsules
$40.85
Go to Store
Go to Store
Compare store prices
See all Thorne Research Products on PricePlow

Thorne Research R-Lipoic Acid 100 mg. - 60 Vegetarian Capsules Alpha-lipoic acid (ALA) contains two forms – designated as R-lipoic acid (R-ALA) and S-lipoic acid (S-ALA) – that are mirror images of each other. Naturally occurring ALA is in the R form, where it functions as an essential cofactor for many enzymes involved in energy production. In addition, R-lipoic acid has important characteristics – significant antioxidant effects in particular – that contribute to liver, nerve, and eye health. Dietary supplements of ALA are generally comprised either of R-ALA by itself or a mixture of R-ALA and S-ALA. Studies indicate the R-ALA form appears to be better absorbed, with twice as much R-ALA than S-ALA appearing in the bloodstream after an oral dose. Hence, R-ALA is the best form utilized by the body. Thorne Research provides R-lipoic acid bound to sodium – the most bioavailable form of R-lipoic acid. supports neurological function antioxidant in both water- and fat-soluble tissues essential for liver, eye, and nerve health the form of supplemental lipoic acid found in highest concentration in the bloodstream Dr. Michael Lebowitz D.C. Recommends:This is the most bioactive and absorbable form of Alpha-Lipoic Acid. Taken orally it is rapidly converted to DHLA, which has strong antioxidant activity in both water and fat soluble domains. Besides neutralizing reactive oxygen species, it also regenerates reduced glutathione and vitamin C. It is also a good product for metal toxicity, especially cadmium, copper, and mercury. It can complement mercury chelators such as Metaplex, Captomer, and Glutathione-SR, as it increases mercury biliary excretion. It may also be indicated in hepatic disease, diabetic neuropathy, and liver, eye, and nerve health. From an AK standpoint, sometimes Thiocid out tests R-Lipoic Acid and sometimes the reverse is true; Dr. Michael Lebowitz supplements as per his test results. Thorne Research's MissionAt Thorne Research, their mission