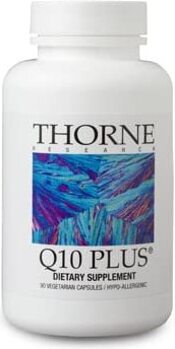 Go to Store
Quick Links to Deal PricesHow does this work and how do stores get listed? See our disclosure below to learn more.
Size
Deal Price
90 Capsules
$34.20
Go to Store
Go to Store
Compare store prices
See all Thorne Research Products on PricePlow

Go to Store
Thorne Research, Q10 Plus, 90 Veggie CapsThis combination of coenzyme Q10, hawthorne (Crataegus oxycantha), potassium, taurine, and magnesium provides the heart muscle with nutrients for healthy functioning.CoQ10 is a vital element for the heart. Cells of the heart muscle have a high metabolism and need CoQ10 as an energy-producing cofactor. CoQ10 also serves as an antioxidant. Numerous studies on CoQ10 show its benefit in cardiovascular function. In a 73-subject study with CoQ10 supplementation at 120 mg daily, improvements were observed after 28 days. Thorne Research, Q10 Plus, 90 Veggie Caps

Taurine is an essential nutrient cofactor for cardiac function and the most abundant amino acid in the heart. Research indicates supplementation with taurine supports already normal levels of cholesterol, probably due to taurine's ability to help convert cholesterol to bile acids. In addition, taurine aids in the regulation of intracellular calcium levels, which helps protect the heart muscle and support cardiac function.Flavonoid compounds in hawthorne appear to strengthen blood vessels and support cardiac function; whereas, flavonoids in Ginkgo promote blood flow. Hawthorne has been shown to be supportive of good cardiac health by helping to maintain already normal blood pressure, heart rate, and exercise capacity. The flavonoids in hawthorne and Ginkgo act as antioxidants and may improve artery function, which promotes dilation and blood flow.Magnesium and potassium are minerals necessary for proper cardiovascular function.Suggested UseTake 3 capsules one to two times daily or as recommended by your health-care practitioner.Other IngredientsHypromellose (derived from cellulose) capsule, leucine, silicon dioxide.Crataegus standardized to Vitexin-2"-0-rhamnosides 1.8%. Ginkgo standardized to Ginkgoflavonglycosides 24% and Ginkgolides 6%.