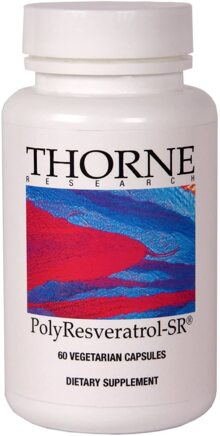 Go to Store
Quick Links to Deal PricesHow does this work and how do stores get listed? See our disclosure below to learn more.
Size
Deal Price
60 Capsules
$51.30
Go to Store
Go to Store
Compare store prices
See all Thorne Research Products on PricePlow

Resveratrol: A flavonoid-like molecule found in grapes, mulberries, and other plants, resveratrol mimics the anti-aging effects of calorie restriction. A significant decrease in the harmful effects of a high-fat, high-calorie diet was observed in mice, most likely due to increased fat metabolism from the up-regulation of the SIRT-1 enzyme, which acts as a cellular switch by both increasing the number of mitochondria and supporting their function. SIRT-1 also has a positive impact on blood glucose metabolism, insulin sensitivity, and cell survival. Thorne Research, PolyResveratrol-SR, 60 Veggie CapsPterostilbene: A naturally-occurring methylated metabolite of resveratrol, pterostilbene appears to be better absorbed than resveratrol and is not as easily broken down in the liver. Animal and in vitro studies show pterostilbene has anti-aging effects similar to resveratrol, but it reaches higher levels in the blood and is longer lasting in the body.Curcumin Phytosome, Green Tea Phytosome, and water-soluble Quercetin: Research shows quercetin slows the breakdown of resveratrol in the body, acts as a potent antioxidant, and is synergistic with the activities of resveratrol. Green Tea Phytosome has a positive effect on fat metabolism, promotes optimal liver detoxification, and is highly absorbed. Curcumin Phytosome is significantly better absorbed than a standardized curcumin extract, and studies show it supports the body's normal inflammatory response and demonstrates synergistic anti-aging activity with resveratrol.PolyResveratrol-SR is a unique, science-based formula containing pure resveratrol and synergistic ingredients:

pure, 100% trans-resveratroltrans-pterostilbene, a natural metabolite of resveratrolsynergists including water-soluble quercetin, green tea phytosome, and the amazing curcumin phytosome (Meriva), for enhanced antioxidant activity, fat metabolism, and support of the normal inflammatory responseAll in an exclusive patent-pending time-release matrix that promotes higher and more consistent blood levels of the ingredients over time.

The Science Behind ResveratrolResveratrol - a polyphenolic compound called a stilbene, which is similar in its structure to a flavonoid - is found in grapes, cranberries, blueberries, peanuts, rhubarb, and other plant species. It is a protective antioxidant molecule produced in these plants as a result of stress, such as fungal invasion, injury, oxidative damage, and ultraviolet radiation. Like flavonoids, resveratrol is a potent antioxidant; but it is also a unique molecule that has significant anti-aging effects.

Researchers are studying the effects of reducing calorie intake on lifespan, and numerous studies now show caloric restriction appears to lengthen lifespan in many species. Resveratrol supplementation has been shown to mimic the effects of caloric restriction, increasing the lifespan of numerous species, including yeast, roundworms, fruit flies, and mice. In studies in which mice were fed either a high-calorie diet, a low-calorie diet, or a high-calorie diet with resveratrol, the resveratrol-supplemented high-calorie group did not exhibit some of the adverse metabolic effects associated with this diet. The resveratrol-supplemented mice were more insulin sensitive, did not develop fatty liver, and lived longer. The resveratrol fed mice also had improved muscle function, and in one study the mice did not gain weight. Resveratrol appears to work by activating specific genes that result in modulation of cellular activity, including up-regulation of the SIRT-1 enzyme, which acts as a cellular switch that supports mitochondrial function and increases the number of mitochondria in each cell. An increase in cellular mitochondria results in more efficient energy production within the cell and may relate to more efficient fat metabolism and increase longevity. SIRT-1 also is involved in blood glucose regulation, insulin sensitivity, and cell survival.

Its impact on the SIRT-1 enzyme is just one of many cellular effects resveratrol has on the body. Resveratrol also modulates the activity of cellular transcription factors like NF-KB, which helps regulate the body's normal inflammatory response, cell proliferation, and immune activity. Resveratrol supports cardiovascular function via its antioxidant activity and by increasing the activity of endothelial nitric oxide synthase (eNOS), thus increasing the production of nitric oxide in vascular endothelial cells. This results in healthier blood vessels. better regulation of vasodilation and blood flow, and decreased adhesion of inflammatory cells in blood vessels.

Resveratrol is considered by some researchers to be the molecule in red wine that explains the "French Paradox," an epidemiological observation that the French, who eat more saturated fat and drink more alcohol than citizens of many other countries, have a lower risk of cardiovascular disease. Resveratrol's support of the body's normal inflammatory response and its health-promoting effects in blood vessels may partly explain this observation.

Quick Absorption and Rapic MetabolismWhen a resveratrol supplement is ingested it is quickly absorbed from the small intestine; then, after reaching the liver, sulfur or a glucuronic acid molecule attaches to the resveratrol, which inactivates it. This rapid metabolism of resveratrol has caused researchers to doubt whether resveratrol taken orally results in high enough blood levels to have the effects in the body that have been seen in numerous in vitro and animal studies.

The Thorne Difference. For more than 25 years, Thorne has relentlessly pursued the highest possible quality and bioavailability in dietary supplements. At Thorne, they actually manufacture products that they sell – a key difference that allows Thorne to control every aspect of the manufacturing process and ensure that every Thorne product is in pure, completely hypoallergenic form, and without the common additives, flowing agents, and binders used throughout the industry.

A few other companies have tried to do what Thorne does, and many others claim to have the same philosophy and quality, but nobody has been able to duplicate what Thorne's clients call "Thorne Quality." Thorne has changed the industry in many ways over the past two decades, and they continue to raise the bar and set new standards in product formulation, raw material purity, manufacturing, and quality control.

Thorne's Commitment to PurityPractitioners have become accustomed to seeing the vague "We use only the purest ingredients" in the promotional materials of almost every dietary supplement company. Perhaps these companies truly believe that. Perhaps they don't know any better. Nevertheless, Thorne Research, for more than 25 years, has been the standard by which companies in the industry are judged for product purity. Practitioners rely on Thorne as the company they trust for their extremely allergic, chemically sensitive, and immune-compromised patients.

Purity Takes Extra EffortFor example, instead of purchasing prediluted vitamin D, as other companies do, Thorne performs its own dilution to avoid detrimental ingredients, such as the preservatives or lactose that are found in many commercially available dilutions. Why must vitamin D be diluted? Because in its pure form, it is too concentrated to safely blend into a vitamin product. Pure vitamin D is 40 MILLION International Units (IU) per gram. The RDA for adults is 600-800 IU per day. To ensure proper mixing, it must be made into a dilute powder that flows and does not lose potency. So, unlike companies that use prediluted vitamin D that contains unacceptable excipients and preservatives, at Thorne, pure pharmaceutical vitamin D is first blended with pure mixed tocopherol vitamin E, and the resultant stable vitamin D is then blended with hypoallergenic cellulose powder. The final powder is blended in a large tumble blender and subsequently analyzed. Not only is the final product stable; it is also hypoallergenic and can be mixed homogeneously and at a safe level with other powders. Just as with vitamin D, Thorne utilizes similar processes for other raw materials, such as vitamin K, leaving it to other companies to purchase commercially available raw materials filled with unacceptable ingredients and preservatives.

Ingredients You Don't WantMagnesium Stearate: Good for speed-hungry encapsulating machines. Not necessarily good for you. Manufacturing encapsulated dietary supplements isn't easy. Pure powdered ingredients are difficult to mix because they are either extremely dry, sticky with botanical oils, or attract unwanted moisture. So most manufacturers add magnesium stearate and other agents such as lactose and dextrose to make the powder flow quickly and easily through their high-volume machines. Problem is, these additives may compromise the bioavailability of the nutrients in the supplement, and might cause allergenic problems. At Thorne, they take a different approach.

Thorne will never utilize large fatty acid excipients in its manufacturing processes – ingredients such as magnesium stearate or stearic acid. These excipients are utilized as flowing agents to ensure that maximum productivity is obtained from capsuling and tableting machines. There are documented detrimental effects directly attributed to long chain fatty acids utilized as manufacturing flowing agents. Every qualified pharmaceutical compounder recognizes that large fatty acids, such as magnesium stearate, can interfere with product dissolution and influence absorption. Virtually all companies, because of the economic impact, ignore this data. As with most industries, the bottom line dictates the level of quality. The dietary supplement industry has one exception: Thorne Research, the company that does not compromise. Nevertheless, if a company cannot manufacture products without using detrimental excipients, they should not allude to being either "hypoallergenic" or "pure."

The Bottom Line?Thorne is the only hypoallergenic dietary supplement manufacturer with the highest degree of purity that you – and your most severely allergic, chemically sensitive, and immune-compromised patients – can truly trust.

Quality Ingredients: A Higher StandardAt Thorne, they are committed to setting a higher standard of quality when it comes to ingredients. To produce their truly hypoallergenic encapsulated supplements, Thorne uses only the purest and finest ingredients available.

There are few commercial sources for vitamins B12, D, K, or biotin that are not diluted with substances such as lactose, cornstarch, and preservatives such as BHT. That's why Thorne developed methods that allow them to use pure, undiluted sources of these nutrients – and many others. It's just one more example that when it comes to quality, what everyone else accepts as an industry standard isn't good enough. While some companies say they are raising their standards....at Thorne they set them.