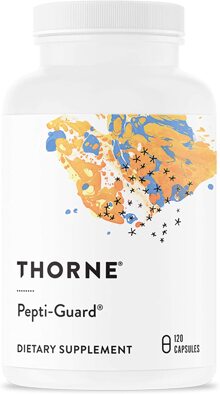 Go to Store
Quick Links to Deal PricesHow does this work and how do stores get listed? See our disclosure below to learn more.
Size
Deal Price
120 Capsules
$45.60
Go to Store
Go to Store
Compare store prices
See all Thorne Research Products on PricePlow

Go to Store
Thorne Research, Pepti-Guard, 120 Veggie CapsPepti-Guard is the long-anticipated reformulation of our tried and true standby – Formula SF734. This GI support product is formulated for specific support of healthy flora in the upper gastrointestinal tract, particularly the stomach.Pepti-Guard helps maintain a healthy balance of GI flora while helping soothe and heal mucus membranes. This new product contains the same primary ingredients – deglycyrrhizinated licorice (DGL), berberine HCl, and bismuth citrate – as Formula SF734. However, the bentonite clay has been replaced with a potent aloe vera extract with significant GI healing properties. Thorne Research, Pepti-Guard, 120 Veggie CapsAloe vera is used to soothe and heal the sensitive mucus membranes of the GI tract. We have sourced the highest quality aloe vera on the market for this product – DaltonMax 700. It is organic and is taken only from the inner gel of the aloe plant. It does not contain any other portions of the plant that might cause gastric upset or have a laxative effect. Thorne Research, Pepti-Guard, 120 Veggie Caps

Key benefits of DaltonMax 700, an extraordinary aloe vera extract:Extracted only from the inner fillet gel, which has NO LAXATIVE OR IRRITATING EFFECTS Thorne Research, Pepti-Guard, 120 Veggie CapsLow-heat dehydration preserves the bioactive ingredients Thorne Research, Pepti-Guard, 120 Veggie Caps200:1 potency for maximum benefitOrganic and solvent-free for maximum puritySuggested UseTake 2 capsules two times daily between meals for a maximum of eight weeks, or as recommended by your health-care practitioner.Other IngredientsHypromellose (derived from cellulose) capsule, leucine, silicon dioxide.WarningsTamper Evident: Use only if bottle is sealed.If pregnant, nursing, or trying to conceive, do not use this product. Store tightly sealed in a cool, dry place.