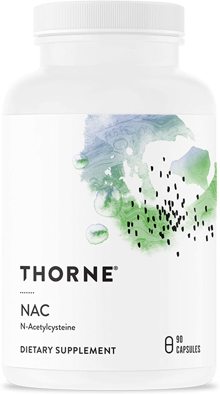 Go to Store
Quick Links to Deal PricesHow does this work and how do stores get listed? See our disclosure below to learn more.
Size
Deal Price
90 Capsules
$23.75
Go to Store
Go to Store
Compare store prices
See all Thorne Research Products on PricePlow

A potent antioxidant that supports liver detoxification and thins the mucus for improved respiration.

NAC (N-Acetylcysteine) is a potent amino acid that increases glutathione levels (for liver detoxification). In addition to supporting respiratory health, it also has kidney-protective effects.

N-acetylcysteine (NAC), a sulfur-containing amino acid, is the precursor to the amino acid L-cysteine, one of the three amino acids that comprise glutathione. Animal and human studies of NAC have concluded it has potent antioxidant activity. In addition to its antioxidant activity, NAC is effective in promoting normal liver detoxification and protecting the liver and the kidneys from toxic insults. As a sulfur source, NAC stimulates the synthesis and activity of glutathione, an important antioxidant in its own right. Research suggests NAC is capable of enhancing immune function. NAC also helps maintain good pulmonary health due to its mucolytic activity.

The sulfur in NAC is able to cleave the bonds in mucoproteins, which results in mucus being broken into smaller, less viscous pieces. Hence, NAC's ability to decrease the viscoelasticity of nasal mucus and increase the clearance of mucus by the cilia by thinning secretions helps maintain good pulmonary health.