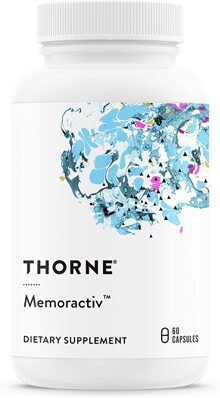 Go to Store
Quick Links to Deal PricesHow does this work and how do stores get listed? See our disclosure below to learn more.
Size
Deal Price
60 Vcaps
$79.00
Go to Store
Go to Store
Compare store prices
See all Thorne Research Products on PricePlow

Thorne Research has created a comprehensive, synergistic blend of the most widely studied supplements that can promote brain health in one memory-enhancing product. The ingredients in Memoractiv support cognitive function via a variety of mechanisms of action and are provided in a convenient combination formula. Now, with a new improved formula.

An Ayurvedic herb, Bacopa monnieri is neuroprotective and has been shown to support memory and learning. Bacopa results in a relaxed-yet-focused effect by enhancing levels of the inhibitory (relaxing) neurotransmitter GABA.