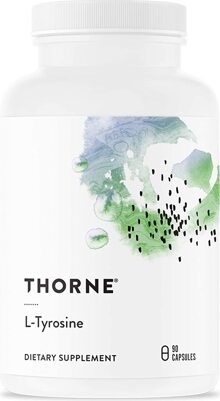 Go to Store
Quick Links to Deal PricesHow does this work and how do stores get listed? See our disclosure below to learn more.
Size
Deal Price
90 Capsules
$22.80
Go to Store
Go to Store
Compare store prices
See all Thorne Research Products on PricePlow

Go to Store
Thorne Research, L-Tyrosine, 90 Veggie CapsTyrosine is an amino acid precursor for synthesis of the neurotransmitters norepinephrine and dopamine. By improving the rate of neurotransmitter synthesis, tyrosine stimulates the central nervous system. It appears to function as an adaptogen by relieving physical symptoms of stress, such as mood swings. Chronically stressed individuals may not efficiently convert phenylalanine to tyrosine, making supplementation with tyrosine desirable.Tyrosine also serves as a precursor for the thyroid hormone thyroxine and melanin, the pigment responsible for skin and hair color and protection against harmful ultraviolet rays. In addition, tyrosine stimulates growth hormone and is involved in adrenal and pituitary function. Tyrosine is also a powerful antioxidant, scavenging and neutralizing free radicals and inhibiting fat oxidation

Suggested UseTake 1 capsule three times daily or as recommended by your health-care practitionerOther IngredientsHypromellose (derived from cellulose) capsule, leucine, silicon dioxide.WarningsTamper Evident: Use only if bottle is sealed.Warning: If pregnant, nursing, or trying to conceive, consult your health-care practitioner before using this product.Store tightly sealed in a cool, dry place.