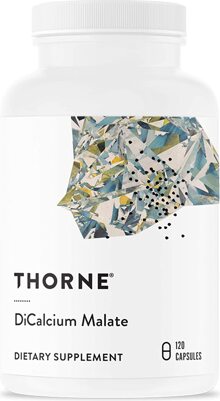 Go to Store
Quick Links to Deal PricesHow does this work and how do stores get listed? See our disclosure below to learn more.
Size
Deal Price
120 Capsules
$19.95
Go to Store
Go to Store
Compare store prices
See all Thorne Research Products on PricePlow

A concentrated calcium supplement for individuals most at risk for calcium inadequacy.

DiCalcium Malate contains DimaCal, which is optimally absorbed and is more concentrated than other calcium forms, providing more calcium per capsule.

Research indicates that a large proportion of the U.S. adult population does not consume the 1,300 mg of calcium the U.S. Food and Drug Administration recommends for daily dietary intake. Individuals who are at the most risk for calcium inadequacy because of decreased intake, disordered metabolism, decreased absorption, increased loss, or increased need include peri- and postmenopausal women, vegans, individuals who take certain prescription and OTC medications, and those with a vitamin D deficiency (because vitamin D is necessary for calcium absorption). Thorne's DiCalcium Malate (DimaCal), with 250 mg per capsule, is more concentrated than other forms of calcium (such as calcium carbonate), and is absorbed significantly better than calcium carbonate.

DiCalcium Malate consists of one molecule of malic acid that is bound to two molecules of calcium, which results in a compound that is 29-percent calcium – compared to calcium citrate, which is 19-percent calcium – thus resulting in more elemental calcium per capsule.

Those individuals most at risk for inadequate calcium intake are: