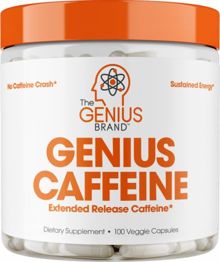 Go to Store
Quick Links to Deal PricesHow does this work and how do stores get listed? See our disclosure below to learn more.
Size
Deal Price
100 Vcaps
$11.99
Go to Store
Go to Store
Compare store prices

The Genius Brand Genius Caffeine Mentions on the PricePlow Podcast

The Genius CEO - Rob Oliver of The Genius Brand Tells All

GENIUS CAFFEINE is different than every other caffeine pill on the market because it’s sustained released, ultra-pure trademarked NEWCAFF. Normal caffeine is quickly absorbed, leading to a stimulating effect after consumption, which leads to energy fluctuations. Through a sustained release, microencapsulation technique, Genius Caffeine provides true sustained energy that stimulates thermogenesis, accelerating the rate at which your body burns calories.* It may also help to suppress the appetite for extended periods of time.*