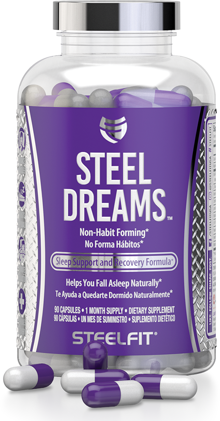 Research has shown that L-Theanine increases the levels, as well as the effectiveness, of GABA, the body’s primary “downer” neurotransmitter.*

Valerian Root Powder (Valeriana Officinalis): The most commonly used herb to induce sleep in both the United States and Europe. Numerous studies and meta-analyses have noted the slumber-inducing botanical to be an effective option for those looking to improve sleep and insomnia without experiencing any adverse side effects.*

One of the primary components within Valerian is a compound called valerenic acid, which has been noted to increases brain levels of GABA, slowing down nerve activity in the brain and generating a calming effect.*

Chamomile Powder (Matricaria Chamomilla) (Flower): One of the oldest medicinal herbs in human history, Chamomile is one of the most popular nighttime teas individuals brew when looking to relax, unwind, and get ready for a restorative night’s sleep.*

The flowers of chamomile are rich if terpenoids and flavonoids, and its believed these phytochemicals are the driving force behind the use of chamomile in the treatment of numerous ailments including everything from muscle spasms to insomnia and even rheumatic pain.*

One of the more prominent flavonoids within chamomile is apigenin, which has been noted to exert mild sedative effects due to its affinity for the benzodiazepine receptors in the brain. As a result of this binding, chamomile exerts a mild depressive effect, soothing a hyperactive CNS, allowing you to unwind in the evening and set the stage for a “productive” night’s rest.*

Lemon Balm Extract (Melissa Officinalis) (Leaf): A lemon-scented herb renowned for its calming and anti-inflammatory properties. Lemon balm is rich in many triterpenes, phenolics, and other volatile compounds shown to increases GABA levels in the brain through its inhibition of GABA transaminase — the enzyme that degrades GABA.*

Research using lemon balm alone or in combination with valerian (also present in Steel Dreams) notes improved sleep quality in patients who have insomnia. Researchers attributed this enhanced quality of sleep to increased levels of GABA, which promote calmness and relaxation.*

Rutaecarpine: Extracted from the Chinese herb Evodia rutaecarpa, rutaecarpine is an alkaloid noted for its vasorelaxant effect as well as its ability to increase the body’s metabolism of caffeine. Rutaecarpine enhances the speed with which your body processes and excretes caffeine, which is important if you’re one of those people who consume caffeine late in the day and has trouble getting to sleep at night.*

5-HTP (5-Hydroxytryptophan) (Griffonia Simplicifolia) (Seed): A metabolite of L-Tryptophan (an essential amino acid, as well as the direct precursor to serotonin — a neurotransmitter/hormone that plays a critical role in mood as well as sleep. However, unlike serotonin which cannot cross the blood-brain barrier, 5-HTP readily crosses it and readily converts to serotonin.*

In addition to its mood-boosting effects, 5-HTP, in combination with GABA-promoting agents (like the ones found in Steel Dreams) has been noted to reduce sleep latency (the time required to fall asleep) along with improvements in sleep duration and quality.*

Passionflower is loaded with bioactive compounds including various flavonoids, indole alkaloids, and maltol. Chief among these compounds is chrysin, a flavonoid documented to bind to benzodiazepine receptors and act as an agonist for GABA activity. The result of these actions is that passionflower has an inhibitory effect on the brain, promoting relaxation and alleviating stress. Research using passionflower tea noted it improved subjective measures of sleep quality in adults.*

Apocynum venetum has long been used in traditional Chinese medicine as an anxiolytic. One of the flavonoids present in Venetron, kaempferol, has been shown to be an important anxiety-reducing compound.* Human trials using this new age stress/anxiety relief agent note its safety and efficacy for improving symptoms associated with insomnia, anxiety, and depression.*

Melatonin: A hormone naturally produced by the pineal gland that plays a critical role in our circadian rhythm which regulates our sleep-wake cycles.*

Secretion of melatonin is low during daylight, slowly increasing after sunset, with peak levels generally occurring between the hours of 11 PM and 3 AM. However, melatonin production is stunted by exposure to light, mainly blue light — the same kind of light emitted from your tablet, smartphone, laptop, and tv. The longer you expose yourself to blue light, the more you reduce melatonin secretion, and the more difficulty you have sleeping.

Supplementing with melatonin is a safe, all-natural, and non-habit forming method for enhancing melatonin production in the body, thereby ushering you off to a deep, restorative night’s rest.*

Calcium (as Calcium Carbonate and Calcium Citrate): A mineral that is necessary for life. In addition to building bones and keeping them healthy, calcium enables our blood to clot, our muscles to contract, and our heart to beat.*

Magnesium (as Magnesium Aspartate): A cofactor in more than 300 enzyme systems that regulate diverse biochemical reactions in the body, including protein synthesis, muscle and nerve function, blood glucose control, and blood pressure regulation.*

One of the main symptoms of insomnia happens to be magnesium deficiency, which is incredibly common in physically active individuals. Research notes that supplementing with magnesium improves insomnia.*