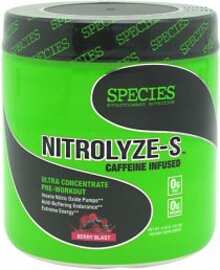 Nitrolyze-S (with buffered caffeine) is the most potent ultra-concentrate pre-workout formula on the market. Nitrolyze-S contains effective dosages of all ingredients with exact amounts listed right on the label. No "proprietary blends" that contain nothing but "pixie dust" and loads of stimulants. Species Nutrition's Nitrolyze formula addresses 3 specific areas of concern to maximize performance in the gym.*

Much of beta-alanine's effects are realized by boosting the synthesis of the dipeptide, carnosine, inside the muscle cell. Researchers have shown that when supplementing with beta-alanine for just 4 weeks, carnosine concentrations can increase substantially. After 10-12 weeks, carnosine concentrations increased even further. Carnosine has the ability to buffer acid buildup within the muscle cells thus increasing strength, power and muscular endurance.*

Choline bitartrate is a dietary supplement that can lead to an increase in the neurotransmitter, acetylcholine, which helps with mental focus and reduction of fatigue.*

Beet root juice has been found to improve performance in athletes, because of its abundance of nitrites that, ultimately, lead to dramatic increases in nitric oxide release. Beet root juice also increases the uptake of oxygen leading to greater endurance and stamina.*

Cinnulin is a cinnamon extract that acts as an insulin sensitizing agent ensuring that carbohydrates are properly shuttled into muscle cells where they can be used as energy while training.*

Xanthinol Nicotinate is a vasodilator that's a combination of xanthinol and niacin (nicotinic acid). In fact, xanthinol nicotinate is the most potent form of niacin. It passes easily through cell membranes and can act inside the cell. Scientific research has shown that xanthinol nicotinate: (1) increases glucose metabolism (2) improves ATP levels (3) stimulates blood circulation.*

Rauwolscine contains the active compound, alpha-yohimbine, which blocks alpha-2 receptors (not alpha-1) on blood vessel walls. This increases blood flow to the muscles as well as the genitals making it a fantastic sexual aid as well.*