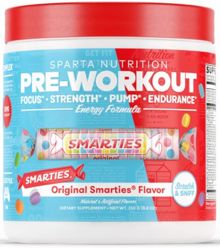 Go to Store
Quick Links to Deal PricesHow does this work and how do stores get listed? See our disclosure below to learn more.
Select Variation(s):
Size
Deal Price
20 Servings
$17.50
Go to Store
Go to Store
Compare store prices

Sparta Nutrition Pre-Workout is a delicious ultra-premium energy formula designed to elevate your performance.* This fully-loaded formula was built to simply deliver the best pre-workout experience by supporting energy, mood, and focus to help bridge the gap between you and peak performance. *

Not all pre workouts are made equally. We set out to separate ourselves from the pack by creating a pre-workout supplement that fazes convention. Sparta Nutrition Pre-Workout provides a multi-functional experience by providing clean energy and focus ingredients to help bring you to the next-level. *

We make sure Pre-Workout is clearly labeled with everything that goes into our formula. No surprises. Zero proprietary blends. No banned substances. Fully disclosed, Pre-Workout lists out each ingredient so you know exactly what you’re getting per scoop.

Our approach was to create the most effective and best tasting pre-workout for everyone, starting with premium ingredients that stand up to the test.

What’s in Sparta Nutrition Pre-Workout? Let’s take a look at the key ingredients (per 2 scoops)*.

By this point, our unique and authentic flavors speak for themselves. Sparta Nutrition Pre-Workout has redefined the pre-workout experience with industry-leading flavors and unrivaled flavor systems that bring you back to your childhood. The days of gritty texture or chalky taste are behind us. Get the best tasting pre-workout in the industry with the confidence of knowing exactly what you’re putting into your body with Sparta Nutrition.