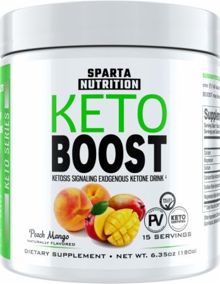 Go to Store
Quick Links to Deal PricesHow does this work and how do stores get listed? See our disclosure below to learn more.
Size
Deal Price
15 Servings
$2.99
Go to Store
Go to Store
Compare store prices

Have you found it hard to enter ketosis? And when you finally get in, have you felt like you were living in a total fog?

Do you want to get into ketosis as soon as possible -- and stay there?

You aren’t alone. These three issues are the most common obstacles encountered by those transitioning into a low-carb, high-fat ketogenic diet. There are plenty of keto supplements out there, but none of them have that Sparta Nutrition taste! So we did what we always do - we made the supplement industry a better place.

Keto Boost is a product we designed around "BHB electrolytes" — electrolytes that will help you get into ketosis faster and more efficiently. And unlike the competition's, ours don't taste like a bucket of salt!*

Keto Boost consists of massive doses of beta-hydroxybutyrate (BHB) salts mixed with an amazing taste matrix. And... that’s all it is. As the body shifts into ketosis, it begins to use ketone bodies (like BHB) for energy, thanks to the lack of glucose available. This is a wonderful state to be in because your body becomes extremely efficient at burning fat for fuel.*

The issue comes with how long it takes to get into ketosis, as it may take a few days (or more) to get transitioned away from that unhealthy, sugar-fueled environment. Providing the body with high doses of ketones (like BHB salts!) to begin with may help your body fat adapted quicker.*

ALREADY IN KETO? TIME TO BOOST IT UP.

For those already in ketosis, BHB electrolytes can seriously help when taken pre-workout or even during workouts, when your body's own ketones are beginning to dwindle. The extra rush of the energy from these "exogenous ketones" may give you a second wind, even without caffeine! Those struggling with energy as they shift into ketosis may also experience an energy rush.

Another benefit from these BHB salts are the fact that they provide electrolytes keto dieters desperately need. We provided calcium BHB, sodium BHB, and magnesium BHB. Since ketosis can lower your electrolyte levels as the transition occurs, replacing lost electrolytes is pertinent to avoid annoying side effects -- side effects so annoying they're often called the "keto fog". In addition, these electrolytes are common deficiencies in athletes who aren't even in ketosis, so they can provide benefits for anyone!*

It gets even better. Science shows that keto salts may provide endurance benefits to athletes.

So Keto Boost helps ramp up the transition to ketosis faster and can make us last longer in the gym, without a significant performance decline as we get fat-adapted. But drinking a ton of sodium, magnesium, and calcium salts sounds like it'd taste awful... and usually, it does. But not so fast, because this is Sparta.

The honest truth is that BHB electrolyte supplements are nothing new. But BHB salts that tastegood? Those are few and far between. We set out to make the industry-leading, most delicious product, and keep blood sugar spiking ingredients out of the equation.

Since most of the better-tasting ingredients on the market wreak havoc on ketosis (especially when you're just trying to transition in), we designed Keto Boost to sidestep this issue while still being delicious. And you know what the best part is? We didn’t use a single artificial sweetener!

SWEETENED BY STEVIA AND MONK FRUIT. NO SUCRALOSE.

Stevia and monk fruit are darlings of the keto community. Despite stevia being 300x sweeter than sugar, it is calorie and carbohydrate free. The issue is that it can be bitter, so we went where few other companies figured to go - we also included monk fruit to round out Keto Boost's flavor profile! This keeps us away from sucralose because who needs fake sweeteners when nature gives us the best sweeteners in the world anyway?

To make things better, we're not going with cheap ketone salts. Market innovations can be scary, and smart consumers want ingredients from smart companies. That’s why we went with goBHB, the only exogenous ketone source to receive GRAS (generally recognized as safe) certification. Trusted and consistent, goBHB is the only choice in keto supplements.

Everything we’ve discussed so far results in one thing: amazing taste. Keto Boost is the best keto supplement you'll ever have. Honestly, try it. We also made sure it mixes well to avoid that off-putting grit that curses many products.

If you’ve tried the ketogenic diet before and got hit in the face with the keto flu, or simply couldn't get deep enough in to make a difference, then it's time to try it again. Just don't go it alone this time, because now you're a keto warrior with the Sparta Nutrition clan. Any trip into the land of low-carb dieting can use a morale boost... or a Keto Boost.The trip to Keto Land is plagued with low energy, irritability, and a lack of delicious beverages... so make the right choice: choose Keto Boost.*