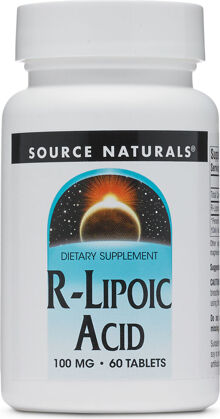 Go to Store
Quick Links to Deal PricesHow does this work and how do stores get listed? See our disclosure below to learn more.
Size
Deal Price
60 Tablets
$19.62
Go to Store
30 Tablets
$10.31
Go to Store
Go to Store
Compare store prices
See all Source Naturals Products on PricePlow
Ingredients

Alpha-Lipoic Acid is an immensely useful compound for your body. It is a powerful antioxidant that is both water and fat soluble, so it fights a wider range and larger number of damaging free radicals. It also aids your body in recycling and increasing levels of other antioxidants: Vitamin C, Vitamin E, CoQ10, and Glutathione.

As powerful as it is, Alpha-Lipoic Acid isn't just limited to antioxidant activity. It is also critical in the energy extraction process of sugar, and it aids in maintaining liver health. To maximize these effects, Source Naturals R-Lipoic Acid isolates the more effective of the two forms of Alpha-Lipoic Acid. For the greatest benefit of this undeniably useful supplement, choose R-Lipoic Acid.

R-Lipoic Acid Description from Source Naturals
Source Naturals R-LIPOIC ACID is a natural form of lipoic acid that your body can synthesize and safely metabolize. It may be better absorbed and more effective as an antioxidant than alpha-lipoic acid. R-lipoic acid by itself may be 10 times more effective than other forms of lipoic acid and has been called the "mitochondrial antioxidant" because it is a key component of mitochondrial dehydrogenase complexes, which may help to slow the natural aging process in animals. Also, animal research has shown that R-lipoic acid can increase or maintain levels of other antioxidants including CoQ10, vitamin C, vitamin E and glutathione, which may decline with age, more efficiently than other forms of lipoic acid.

Manufacturer's Disclaimer
If you are pregnant, may become pregnant, or breastfeeding, consult your health care professional before using this product.
Do not use if either tamper-evident seal is broken or missing. Keep out of the reach of children.