Click the button above and PricePlow will email you with updates from Source Naturals. 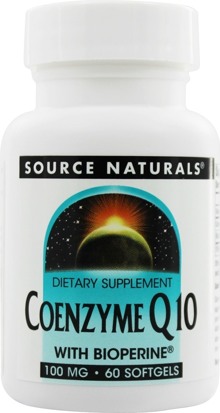 Source Naturals Coenzyme Q10 with Bioperine is a crucial component in the primary energy production cycle. Research indicates that supplementation with this nutrient may support normal heart function, provide antioxidant support and maintain the health of gums. Additionally, Bioperine (black pepper extract) may enhance the absorption of CoQ10. An oil based softgel is fat soluble and may be more bioavailable than tablets or powder-filled capsules.

The Gums
Since the 1970s, scientists have been researching the effects of CoQ10 on the health of the oral tissues. Although the mechanism of action is not known, research has established that CoQ10 has a profound ability to preserve and maintain the health of the gums.

Antioxidant Properties
CoQ10 plays an additional vital role in our metabolism as an antioxidant to protect the lipids in our cell membranes. Laboratory studies have also shown that CoQ10 is more efficient than vitamin E, beta carotene or lycopene in safeguarding LDL cholesterol from oxidation by peroxides. As a molecule, CoQ10 resembles Vitamin K in its chemical structure. Its cellular behavior is similar to that of Vitamin E in the way it absorbs into cells, functioning as an antioxidant.

Free Radical Scavenger
Most simple organic molecules are formed as relatively straightforward carbon and hydrogen chains. At the end of many organic molecules, however, there lie structures like a switch. If the wrong electron—such as a free radical—locks on, the molecule can “morph” into a compound that is undesirable. Free radicals are those single electron molecules that drift through the body, until they find an “open” molecular structure and lock onto it, bringing about an alteration. Our DNA can be affected this way. Alteration of cells can lead to oxidative stress.

CoQ10’s power as a scavenger molecule lies in the way it locks onto a molecule before a free radical can, lending it an electron. The organic molecule is no longer reactive to free radicals. That’s a strong protective power at the cellular level, so it’s important to have a molecule with good mobility within the bloodstream.

Energy Insurance
CoQ10 is needed in body tissues where energy production is critical, such as the liver, brain and muscles, all of which need large amounts of energy to function. Therefore Source Naturals produces CoQ10 as a stand-alone product and they include CoQ10 in significant potencies in many of their premium formulas.

Energy Generation Requires Nutrients
The body requires many nutrients in order to perform the complex biochemical processes that convert food into energy. Some of these nutrients, such as the B-vitamins, are familiar to us. However, there are many other substances essential to this process that are less well known. One of these is Coenzyme Q10 (“CoQ10”) an enzyme that helps transform nutrients into energy. Within each cell, the energy generating process takes place in structures called mitochondria—tiny power plants. Inside these energy-generating stations, fats, sugars, and amino acids are transformed into adenosine triphosphate (ATP), an energy-rich molecule sometimes called the “energy currency” of the body. Almost all biochemical activity in the body needs ATP to provide the energy to catalyze the reactions. The body must produce an astounding half of its own weight in ATP every day, just for normal functioning

CoQ10 is a coenzyme that has been compared to a vitamin. It’s like a vitamin, in that it is naturally occurring, and is necessary for normal functioning of the human body. Without it, imbalances will occur in the body, and our body systems won’t work optimally.

CoQ10’s more formal name clarifies what makes the substance so special. CoQ10 is also known as ubiquinone—from “ubiquitous” to
signify its widespread distribution in each of the trillions of cells in our bodies, and “quinone,” a chemical structure with a unique ability to be oxidized and reduced. Found in most living organisms, it is essential to the production of cellular energy and can be both synthesized in the body and derived from dietary sources. As we age, the body produces less CoQ10. There are many dietary sources of CoQ10, including spinach, meat, poultry and fish. The body generates its own CoQ10 in response to a diet that’s rich in vitamins, minerals and other nutrients. The body’s manufacture of CoQ10 is reduced throughout the aging process. Cellular CoQ10 levels peak at the age of 20 years.

Myriad Functions of CoQ10
Several complex metabolic pathways are required in order for the body to transform food into ATP and energy that we can feel and use. First, digestion breaks down large molecules of protein, carbohydrates, and fat into smaller components. Those components are then further transformed by processes like glycolysis and the Krebs’ cycle. CoQ10 is a key enzyme in the Electron Transport Chain - the final stage in this extraordinary design. This pathway generates 90 percent of our body’s ATP needs from the food we eat.

Support for Key Functions
In its role as a generator of energy, CoQ10 is critically important for all cells and systems but it’s particularly critical for organs and body systems that use large amounts of energy, such as the muscles, the brain, the liver, and particularly the circulatory system.

The Heart: The heart muscle (myocardium) consumes a tremendous amount of energy. The human heart beats over 100,000 times and pumps 1,000 gallons of blood each day. CoQ10 is necessary for the generation of the energy required by the heart. Numerous scientific studies have demonstrated that supplementation with this nutrient may support normal heart function. Its presence is necessary for cardiac performance during exercise as exemplified by criteria including: blood flow, oxygen utilization, and exercise tolerance. In addition, CoQ10 may play a role in maintaining healthy blood pressure.

Leaders of the Wellness Revolution
Source Naturals was created in 1982 by C.E.O Ira Goldberg to support each individual’s potential to enjoy optimal health. At that time, the kind of nutritional formulations he envisioned – for the maintenance of well-being and the enhancement of life – simply didn’t exist. The idea of combining many nutrients, herbs and nutraceuticals in one formulation, though common today, was then a rarity. Source Naturals pioneered the concept with Wellness Formula, now the industry’s #1 immune support product. Source Naturals subsequently introduced numerous award-winning formulas, recognized for their excellence in independent surveys and nutritional analyses. In addition to Wellness, these award-winners include Life Force Multiple, Mega-Kid Multiple, Inflama-Rest, the Skin Eternal line, Higher Mind, Essential Enzymes, Male Response, and more.

Source Naturals’ comprehensive Bio-Aligned Formulas help bring the power of alignment to your body. When formulating, Source Naturals evaluates the underlying causes of system imbalances, and then provides targeted nutrition to interdependent body systems. Source Naturals' line of more than 600 products also includes well-researched, single entity nutrients in their highest quality and most bioavailable forms. Source Naturals nutritional supplements are at the leading edge of today’s Wellness Revolution. This transformation in health consciousness also includes new perspectives in diet, lifestyle, emotional and spiritual development, and complementary health care. Source Naturals Strategy for Wellness is to provide education that empowers individuals to take responsibility for their health, rather than relying solely on outside medical authority. The result is people who are more productive and fulfilled, and a world that is stronger and healthier.

Click the button above and PricePlow will email you with updates from Source Naturals.