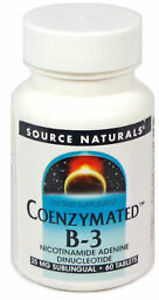 Go to Store
Quick Links to Deal PricesHow does this work and how do stores get listed? See our disclosure below to learn more.
Size
Deal Price
60 Tablets
$16.96
Go to Store
Go to Store
Compare store prices
See all Source Naturals Products on PricePlow

Nicotinamide adenine dinucleotide (NAD) is one of two main metabolically active forms of vitamin B-3. The other is NAD phosphate (NADP). NAD is a prominent coenzyme in the brain, where it helps generate the massive energy that the brain requires for its normal function. NAD is necessary for many stages of converting foods into energy and in alcohol metabolism.

Source Naturals Coenzymated B-6 supports amino acid metabolism. In order for vitamins to be utilized by the body, they must first be converted into their active coenzyme forms. Source Naturals Coenzymated B-6 goes directly into your bloodstream in its active form and ready to go to work immediately. Pyridoxal-5'-Phosphate (PLP or P-5'-P) is the main metabolically active coenzyme form of vitamin B-6. It is primarily in the liver that P-5'-P is synthesized from pyridoxine, with the help of enzymes that require B-2, zinc and magnesium for their activity. P-5'-P activates over 100 enzymes, many of which are involved in the conversion of amino acids into the neurotransmitters dopamine, norepinephrine and serotonin. P-5'-P is also required for the synthesis of the hemoglobin molecule and plays an important role in regulating homocysteine levels.

Pyridoxal-5'-phosphate (P5P) is a cofactor in more than a hundred enzyme reactions. One of its functions is to perform transamination, a key step in both breaking down and producing amino acids in the body. P5P is also necessary to produce the neurotransmitters dopamine, epinephrine, norepinephrine, GABA and serotonin, as well as the hemoglobin in red blood cells. And P5P plays a central role in fat metabolism.

The Benefits of Sublingual Vitamins
In order for vitamins to be utilized by the body, they must first be converted into their active coenzyme forms. Source Naturals Coenzymated B-3 goes directly into your bloodstream in its active form, ready to go to work immediately. This avoids the loss that may occur not only during digestion, but during the liver's conversion process as well. Source Naturals Nutrition For Wellness

Leaders of the Wellness Revolution
Source Naturals was created in 1982 by C.E.O Ira Goldberg to support each individual's potential to enjoy optimal health. At that time, the kind of nutritional formulations he envisioned - for the maintenance of well-being and the enhancement of life - simply didn't exist. The idea of combining many nutrients, herbs and nutraceuticals in one formulation, though common today, was then a rarity. Source Naturals pioneered the concept with Wellness Formula, now the industry's #1 immune support product. Source Naturals subsequently introduced numerous award-winning formulas, recognized for their excellence in independent surveys and nutritional analyses. In addition to Wellness, these award-winners include Life Force Multiple, Mega-Kid Multiple, Inflama-Rest, the Skin Eternal line, Higher Mind, Essential Enzymes, Male Response, and more.

Source Naturals' comprehensive Bio-Aligned Formulas help bring the power of alignment to your body. When formulating, Source Naturals evaluates the underlying causes of system imbalances, and then provides targeted nutrition to interdependent body systems. Source Naturals' line of more than 600 products also includes well-researched, single entity nutrients in their highest quality and most bioavailable forms. Source Naturals nutritional supplements are at the leading edge of today's Wellness Revolution. This transformation in health consciousness also includes new perspectives in diet, lifestyle, emotional and spiritual development, and complementary health care. Source Naturals Strategy for Wellness is to provide education that empowers individuals to take responsibility for their health, rather than relying solely on outside medical authority. The result is people who are more productive and fulfilled, and a world that is stronger and healthier.