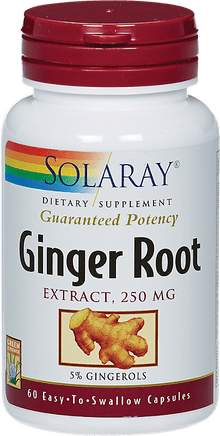 Ginger has been used in cooking and traditional Asian medicinal practice for thousands of years. The Chinese are the first recorded users of ginger for health purposes. They regularly gave ginger to help with digestive disorders, diarrhea, and nausea. Ginger's use as a digestive aid has continued through the centuries leading to the development of popular foods like gingerbread, ginger ale, and ginger snaps. All had their beginnings as digestive aids.

Ginger's health benefits stem from its active ingredients. Ginger's distinctive smell and taste are also a result of the volatile oils and pungent principles it contains including zingaberine, bisabolene, gingerols, and shogoals. Studies that began in the 1980's have confirmed Ginger's value in treating a variety of digestive problems. Other possible applications are also being explored.

One of ginger's primary benefits comes as a digestive aid. Studies showed that taking ginger helped move food through the stomach and intestine. This movement may provide relief to those who experience bloating, pressure, and slow digestion. As an added benefit, ginger may help fight potentially harmful intestinal bacteria like staphylococcus and E. coli. At the same time ginger encourages the growth of the helpful bacteria Lactobacillus. It can also help kill certain parasites. Because of its antibacterial properties ginger may help reduce the occurrence of ulcers caused by Helicobacter pylori. It accomplishes this by increasing the stomach's protective components limiting the ulcer's ability to develop.