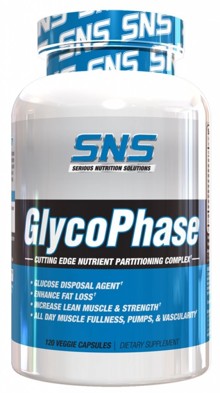 The new 2018 formula of GlycoPhase is here, and it looks like it's playing for keeps against the carbs!

Agmatine Sulfate:
Agmatine Sulfate is one of the few ingredients that has been shown to have the capability to increase GLUT-4 transportation and mRNA expression in skeletal muscle, making it a prime ingredient to help ensure that glucose transport to muscle cells is favored over fat cells (10). It achieves this through an indirect action on beta-endorphin secretion which, in much the same mechanism as exercise, promotes glut-4 translocation into skeletal muscle through activation of imidazoline I2A receptors. (10, 18)

Berberine HCI:
Berberine HCI is one of the most effective ingredients currently available for the purpose of reducing blood sugar. While Berberine's exact method of action is still currently under investigation, it is purported that its ability to activate AMPK is a driver for the regulation of carbohydrate through AMPK's ability to promote glycogen synthesis and increase glucose uptake in insulin sensitive cells, thus removing glucose from the blood faster for immediate oxidization or stored as glycogen for later use as fuel. (19, 20)

Bitter Melon:
Bitter Melon has several active constituents that promote glucose from clearing the blood, with these being charantin, vicine, and polypeptide-p.(13,14) Each one of these exerts their hypoglycemic effect via different physiological modes of action, ranging from stimulation of skeletal muscle utilization to preservation islet B cells (cells integral to proper insulin functioning) thus governing most of the process that underpins blood glucose clearing and helps preserve the integrity of the process. (7, 12)

Of importance is the role of protecting Islet B cell health, whereby destruction of these cells results in a lack of insulin production. Bitter Melon protects against this down-regulating the cytokines responsible for islet cell death, namely interleukin-6, tumor necrosis factor a, and nuclear factor kappa b. While the likelihood of this occurring is low, protection against it may be worthwhile as the effects are detrimental to overall health and longevity. (12)

Banaba Leaf:
Banaba leaf, most notably its primary active ingredient, Corsolic Acid, has been reported to decrease blood sugar levels within 60 minutes in human subjects through its ability to increase cellular uptake of glucose. However it isn't just its ability to reduce blood glucose that is of value, it is also its ability to assist with weight loss. In a study that tested a combination of Banaba, Bitter Melon, Gymnema, and Bioperine on weight loss, subjects lost an average of 6 kilograms over a 12 week period. (13)

In various other human trials, Banaba extracted for Corsolic Acid has been noted to decrease blood glucose by up to 30% in a matter of hours, even when compared to placebo. Its proposed mode of action lies within its ability to stimulate Glut 4 translocation and induce insulin receptor phosphorylation, both of which promote the clearance of glucose from the blood. (14)

Gymnema Sylvestre:
Formulations that include Gymnemic Acids have been used as a useful tool in the fight against obesity. The proposed method of action is through its ability to delay glucose absorption in the blood, thus blocking the over secretion of insulin which may under normal circumstances dump glucose into adipose tissue. (5, 16) Gymnemic Acids have a very similar structure to that of glucose which enables them to compete for the same receptor locations in the intestine, effectively delaying the absorption of glucose into the blood. Gymnema is also particularly useful at curbing sugar cravings due to its ability to fill taste receptors on the tongue, thereby preventing the action of sugar molecules attempting to stimulate the same receptors. (16)

Other mechanisms by which Gymnema is proposed to work include increasing the secretion of insulin, promoting regeneration of islet cells, and increasing the utilization of glucose. (5, 16)

Alpha Lipoic Acid:
Alpha Lipoic Acid (ALA) is a mitochondrial compound heavily involved in energy metabolism. It has various benefits across a myriad of biological processes, including but not limited to neuroprotection, cholinergic transmission, dopaminergic transmission, cholesterol transport, and energy expenditure. (8, 15) It also has a range of benefits pertaining to glucose uptake and AMPK activation, outlining a similar method of action to Berberine. In the murine model, Alpha Lipoic Acid is able to significantly mediate gene expression key rate limiting enzymes involved in glucose metabolism, which is able to increase the rate of glycogen production in the liver. (8, 11, 15, 17)

Na-R-ALA:
Na-R-ALA is the sodium version of the R isomer for Alpha Lipoic Acid which is the most stable and bioavailable form of ALA currently available. It works through the same mechanisms as Alpha Lipoic Acid, but on a much larger scale. Na-R-ALA is most commonly known for its ability to produce dramatic muscle pumps, resulting from increased glucose uptake in skeletal muscle.

Saffron:
Saffron is one of the most underrated glucose disposal agents currently available. It works via multiple methods to directly influence glucose uptake and insulin sensitivity in muscle cells, promoting muscle pumps, and improved blood glucose clearance on an unprecedented scale. (6, 9) It strongly increases cell insulin sensitivity through insulin dependent and non-insulin dependent pathways, and has a major role in promoting Glut-4 transport through AMPK activation. (6, 9)

Glucose transport into skeletal muscle is regulated by 2 distinct pathways. One of which is AMPK and the other is PI 3-Kinase. (2, 6, 9) The P 3-Kinase pathways include activation of Akt, which promotes glycogen synthesis and activation of key enzymes responsible for Glut-4 translocation. AMPK on the other hand plays a vital role in glucose and lipid metabolism. Both pathways increase phosphorylation of mitogen-activated kinase (MAPK) which participates in full activation of insulin-stimulated glucose uptake via GLUT-4. Saffron actives both pathways, hence its effectiveness in clearing blood glucose into skeletal muscle and, where too much glucose is shuttled, it is able to facilitate its preference to glycogen storage over adipose tissue storage. (2, 6, 9)

Chromium
Chromium is an essential mineral which regulates insulin in the body and blood glucose, a mineral which roughly 25-50% of the US population is estimated to be deficient in. Because of its role in the regulation of blood sugar, a deficiency of Chromium may result in glucose intolerance, fatigue, and anxiety. (20) Chromium supplementation may also assist in the reduction of snacking behavior and binge eating. (21, 22)

16. Shanmugasundaram, E., Rajeswari, G., Baskaran, K., Kumar, B., Shanmugasundaram, K. and Ahmath, B. (1990). Use of Gymnema sylvestre leaf extract in the control of blood glucose in insulin-dependent diabetes mellitus. Journal of Ethnopharmacology, 30(3), pp.281-294.