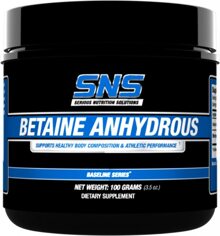 Go to Store
Quick Links to Deal PricesHow does this work and how do stores get listed? See our disclosure below to learn more.
Size
Deal Price
100 Grams
$13.49
Go to Store
Go to Store
Compare store prices

Betaine Anhydrous (otherwise known as Trimethylglycine, aka TMG) has been taking the fitness industry by storm the last few months, and for good reason as illustrated by recent studies.

Betaine anhydrous is an organic osmolyte, acting as an important cofactor in methylation. This is important because methylation is a process that occurs in every cell of humans to synthesize and donate methyl groups for other processes in the body. Methylation allows the synthesis of important neurotransmitters (dopamine and serotonin) for example, and it is required for the biosynthesis of melatonin and CoQ10. Betaine anhydrous works via a pathway that involves Betaine-homocysteine methyltransferase, and this pathway requires Betaine anhydrous (TMG) as a cofactor.

A number of studies has shown that Betaine anhydrous can increase strength and power in bouts of exercise. A recent study in males who trained for 6 weeks showed that subjects who took two daily doses of 1.25 grams of Betaine increased muscle mass by four pounds, decreased body fat by 7 percent, and increased arm size by 10% compared to the placebo group. Results like this place Betaine Anhydrous in the company of other proven ergogenic ingredients such as creatine monohydrate, arachidonic acid (x-gels), and beta alanine, all products SNS currently produces. Betaine has also been studied as a possible treatment for homocystinuria. A bottle of SNS Betaine Anhydrous provides you with 40 days of Betaine Anhydrous at a low cost, which is what we’re known for at SNS.

The Goals of the Serious Nutrition Solutions Baseline Series are simple ones – to provide top quality products at the most cost effective prices, and to provide a straight forward approach to the consumer about what the products are, and what they are used for.