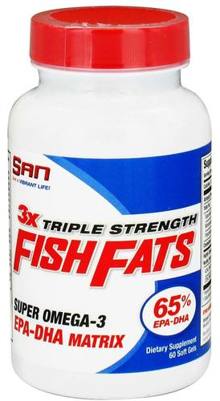 Go to Store
Quick Links to Deal PricesHow does this work and how do stores get listed? See our disclosure below to learn more.
Size
Deal Price
60 Softgels
$18.99
Go to Store
Go to Store
Compare store prices
See all SAN Products on PricePlow

The human organism needs adequate fatty acids to survive the daily bodily processes. Omega-3 fatty acids that are usually obtained from cold-water fish or flax seed oil have demonstrated in clinical research to thwart the production of inflammatory mediators, such as bad prostaglandins. Omega-3's are best measured for its active EPA (eicosapentaenoic acid) and DHA (docosahexaenoic acid) content and not to be mistaken with the total fill weight of the average fish oil capsule found in the super markets. Please review Figure A for a comparison chart between standard fish oil capsules and SAN's Triple Stregnth Fish Fats.

Since the western diet primarily consists of omega 6's and 9's (meat and vegetable oils) it becomes vitally important for those who are interested in offsetting bad prostaglandin production to consume extra Omega-3's that are rich in EPA and DHA content. Yes, what you eat can contribute to the production of inflammatory cytokines. Recent clinical research demonstrated, that population groups who consumed large amount of fish had considerably less heart and circulatory problems than those who eat none. It was concluded that the EPA and DHA content in these fish provided the necessary substrates for the beneficial health effects.

Behavioral and concentration problems in young adults are associated with the active DHA content in the blood plasma. Dyslexics showed remarkable improvement while supplementing EFA's that were rich in DHA and EPA fatty acids. The most interesting study we came across - noted, that individuals with disorders in perception and thought process improved while supplementing an extra 3-5 grams of EPA and DHA daily. DHA is a structural component of the central nervous system. It is also known that DHA is a responsible substrate in facilitating optimum brain and eye development and therefore essential for pregnant women and young children. On a side-note, it was documented that the breast milk of the average American women is the lowest in the world.

In a Chicago Western Electric Study, men who consumed 35grams or more of fish daily compared with those who consumed none had a relative lower risk of death from CHD. Until very recently, very little was known about the effects of fish and omega-3 fatty acids and risk of CHD in women. Fortunately, a study that was conducted with women published in the prestigious JAMA journal reported an inverse association between fish intake and omega-3 fatty acids and CHD death.

Evidence from prospective secondary prevention studies suggest that extra supplementation of EPA and DHA ranging from 0.5 to 2.0g/daily significantly reduces subsequent cardiac and all cause mortality including lowering cholesterol levels, as well as platelet aggregation. The fish recommendation must be balanced with concerns about environmental pollutants, which are often found in fish obtained locally or from South America. It is therefore that a supplement such as SAN's Triple Stregnth Fish Fats becomes so important for those who are concerned about meeting the daily recommendations-which are set forth by the AHA dietary guidelines. One can theoretically increase the serving amount of SAN's Triple Stregnth Fish Fats to 3 soft gels (totaling over 2600mg of EPA & DHA) and therefore have an excellent component to support the daily amounts needed for healthy bodily functions.

Recommended Use: Take 1 soft gels three to four times daily with meals- to satisfy your daily requirements for Omega-3 fatty acids as well as EPA & DHA.