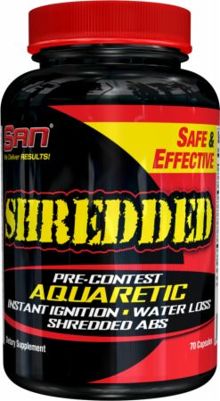 Go to Store
Quick Links to Deal PricesHow does this work and how do stores get listed? See our disclosure below to learn more.
Size
Deal Price
70 Capsules
$15.97
Go to Store
Go to Store
Compare store prices
See all SAN Products on PricePlow
Ingredients

Shredded is scientifically formulated to dramatically reduce excess water for pre-contest diets and photo shoots. Along with being one of the highest potency herbal formula known to man, Shredded also incorporates critical minerals for safety, potency and uptake. Taken as directed, Shredded supports extreme muscular definition and vascularity, safer and faster than most of its peers according to top-notch level bodybuilders.*

Shredded contains a sequence of compounds that are all designed to rid your body of excess water in 72 hours. One of these compounds is called "urtica dioica" (stinging nettle root). Originally investigated for its use in treating prostate disorders it contains what are called "lignans" that directly prevent testosterone from binding to SHBG (sex hormone binding globulin). And when this happens, more of your naturally occurring testosterone will be utilized for what it does best... build muscle and make you strong! Along with its testosterone enhancing properties "Urtica Dioica" has demonstrated to inhibit the aromatase enzyme in fat tissue and therefore liberating fat in a fast and efficacious manner.*

The second compound in Shredded's unsurpassed formula is Uva-Ursi (Arbutin). Uva-Ursi is a very exciting compound because it can help bodybuilders in more ways than one. Uva-Ursi (Arbutin) was first used to treat urinary tract infections in women to "flush the kidneys" of infectious microbes. And flush they do... and more than just microbes. Shredded's high pharmaceutical extract of Uva-Ursi contains more than 30% Arbutin which is an unusual high amount. It also accelerates the bodies ability to flush water whenever it is needed most, like right before a contest or photo-shot.*

The third and forth compounds in Shredded are pharmaceutical caffeine and a specially harvested Green Tea Extract (60% EGCG). Very recent medical research demonstrated that the combo of "caffeine and green tea (the one that contains at least 60% EGCG)" is enormously thermogenic, and many fat burners promoted to the general public contain this powerful one-two punch. The "mechanism of action" for caffeine is that it strongly liberates fat storage by stimulating adrenaline receptors, which cause small elevations in body temperature, which "kick in" the thermogenic process. And caffeine is a very, very potent diuretic as well. It stimulates the kidneys, causing frequent trips to the bathroom... with each successive trip revealing more and more of your six-pack. The last and final compound found in Shredded is Evodiamine. Evodiamine works by increasing what is known as catecholamine production from the adrenal glands. This in turn, through a complex sequence of biological processes, increases what is called cyclic adenosine monophosphate, or cyclic AMP, cAMP. And cAMP is one bad metabolic blaster... causing the eventual activation of 300 different enzyme reactions in the body. And when this happens efficiently, every process in the body, including ATP production, protein synthesis, carbohydrate metabolism, and fat oxidation go into overdrive, and this is exactly what you want... accelerated repair and regeneration! Don't compete another contest or have your picture taken without implementing Shredded into your program.*

SAN Shredded can be combined with Tight! and/or T3 for increased synergistic fat burning effects.*