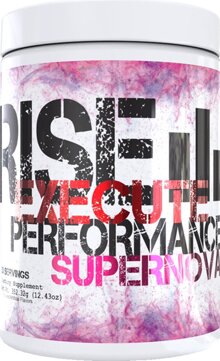 Go to Store
Quick Links to Deal PricesHow does this work and how do stores get listed? See our disclosure below to learn more.
Select Variation(s):
Size
Deal Price
30 Servings
Buy 1 Get 1 FREE
$39.99
BOGO
Go to Store
Go to Store
Compare store prices
See all Rise Performance Products on PricePlow

Go to Store
While Supplies Last!

Feel the frost stricken metal in your hands.

Your muscles full and your flushed skin wrapped tight.

Silencing the world around you.

With your feet rooted to the ground,

You drive forth, pressing on with controlled rage.

Summoning each fiber into complete contraction.

The ability to liberate what we call;

L-Citrulline: L-Citrulline is an amino acid involved in the synthesis of nitric oxide. It can increase ornithine and arginine plasma content driving nitric oxide metabolism while also improving the ammonia recycling process. Nitric oxide is a vasodilator; it allows blood to flow more freely which improves vascularity as well as endurance and strength as you are able to deliver more oxygen, nutrients and hormones throughout your body.

Beta-Alanine: Beside your beloved (or hated) tingles, Beta-Alanine acts as a pH buffer when it forms carnosine inside the body. This pH buffers offers protection from exercise-induced lactic acid production. This reduction in lactic acid is where Beta-Alanine gets its reputation in increasing endurance and strength.

Arginine AKG: Similar to Citrulline, AAKG plays a direct role in the production of nitric oxide. It also has been observed that supplemental arginine intake causes a spike in plasma L-Arginine.

NOTE: Glycerol Monostearate is a banned substance by the NCAA.

Agmatine Sulfate: Agmatine is a derivative of L-arginine which is actually considered to be a neurotransmitter and neuromodulator. It delivers a powerful pump by inhibiting the nitric oxide synthase enzymes allowing it regulate elevated levels of nitric oxide.

Choline L-Bitartrate: Choline is a potent Focus. It can increase focus and alertness like a stimulant and reduce fogginess. It is a precursor to the neurotransmitter Acetylcholine which also improves nerve communication.

Acetyl L-Carnitine: Acetyl L-Carnitine or “ALCAR” is a compound that may alleviate the effects of aging and disease on mitochondria, while increasing the mitochondria’s ability to burn fat. Also in ramping up mitochondrial capacity, this increases alertness which is why ALCAR is also used to increase neurological performance.

Caffeine Anhydrous: Its caffeine. A central nervous system stimulant. If you don’t know what this is you should not be using this product.

Gamma-Aminobutyric Acid: Also known as GABA; a potent neurotransmitter. GABA has been found to reduce stress and act as a Focus. While it increases focus it also works symbiotically with nitric oxide increasing agents such as L-Citrulline and AAKG.
Niacin: Niacin is simply Vitamin B3. This acts to increase the effectiveness and metabolism of other supplements taken at the same time. It also is theorized to promote growth, cognition and reduce cellular decay.

Yohimbine HCL: Yohimbine is a powerful central nervous system stimulant. It works by increasing adrenaline levels in the body, as well as inhibiting a regulatory process in fat cells, which normally suppresses fat burning.