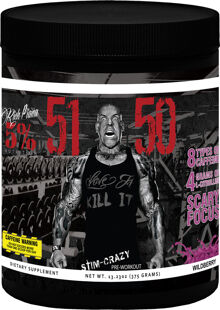 If you’re a true master of the craft and lifting is your life then you already know 5% Nutrition is the only LIFESTYLE to GROW by. The very name of this product should be warning enough that you’re heading into deeper waters.

Have you grown bored of other pre-workouts, having ‘tried them all’ before getting this point?
Do the results you seek lay beyond the normal conditions of training?
Do you need to focus and energize your workout while hydrating your muscles and keeping your body anabolic?

If yes, then you may have met the qualifications to start training like a true 5%ER; to enter the territory where only a few thrive: mass monster territory. If you routinely seek the pain of a long training session and routinely need to be spotted by at least two smaller freaks of the gym, then we’d like to welcome you to 5150 Legendary Series High-Stim Pre-Workout.

The new and improved 5150 Legendary Series, High-Stim Pre-Workout has arrived. This supercharged formula will have the stim-junkies lined up, again! With just a single scoop of 5150 over 400mg of total caffeine will begin to take hold and course through your veins. Prepare yourself for what’s next, blasting yourself into a gym session fueled by a blend of caffeine frp, 8 sources:

COCOABUTEROL Cocoa Alkaloid Extract (Theobroma caco L.)
Cocoabuterol is a new dietary weight loss supplement to activate thermogenic fat burning within the body while boosting your energy and mood. The natural alkaloids in Cocoabuterol can significantly increase cAMP via beta-adrenoceptor which activate thermogenic fat burning and muscle building functions. This translates to fat burning PLUS support for the building of lean muscle tissue without the side effects.

CAFFEINE ANHYDROUS
Commonly used as a fast-acting energy source, Caffeine Anhydrous has been used in many of the best pre-workouts and energy-based products alike. This ingredient will assist with mental alertness as it stimulates the central nervous system, making your energy output much more enhanced in a short amount of time.

DI-CAFFEINE MALATE
What makes Di-Caffeine Malate so interesting is the time-released energy production that is so heavily influenced and reflected by this ingredient. Just like caffeine, this specific ingredient helps improve energy levels and mental focus. Best of all, Di-CM helps to improve endurance and stamina, giving you the energy to combat fatigue accrued during your workout.

Theobromine is somewhat unique in that compared to most stimulants, it's actually been shown to decrease blood pressure. It has mild vasodilating properties, similar to the amino acid Arginine, and is believed to increase blood flow.

YOHIMBINE HCL
Yohimbine hydrochloride (HCl) is a synthetic form of Yohimbine, the active chemical found in Yohimbe Tree bark, and widely studied for its fat-loss and aphrodisiac properties. Research shows that it can increase blood flow, nerve impulse transmission, and excitability in the genital area.

Raw Synephrine HCL powder is a naturally occurring alkaloid chemical compound found in plants and extracted for use as a supplement. Synephrine is sometimes referred to as ‘bitter orange’ as it is derived from small oranges. In actual fact, it is naturally found in the rind of the orange, which is why it is known as “bitter orange”. Bitter orange is currently used for a number similar issues as well as some more modern-day troubles like weight loss and as an aid in the battle against athlete’s foot.

Synephrine hcl enhances the body’s utilization of carbohydrates by producing more energy in the form of ATP. It facilitates cellular uptake of glucose in muscle cells, as well as glycogenolysis, gluconeogenesis, glycolysis, and oxygen uptake. The use of Synephrine hcl will also inhibit the activation of NF-kB, this substance is key in causing inflammatory response in the body. Studies also show that synephrine hcl powder binds to β3-adrenergic receptors, resulting in an increase in the body’s ability to break down fats.

Citrulline is a proven nitric oxide (NO) pump ingredient, delivering sleeve-stretching muscle pump and other great performance-enhancing benefits. Citrulline plays a role in ATP production when your muscles require additional energy. It also helps buffer the buildup of ammonia in muscle, which reduces exercise fatigue and increases workout endurance!

Citrulline has an impact on both the phosphagen and glycolytic energy systems. It can modulate enzymes involved in glycogen breakdown, glycogenolysis, and enzymes that convert glucose to ATP (glycolysis). This action shifts muscle from aerobic to anaerobic metabolism and reduces the rate at which the body uses up ATP and phosphocreatine. This means more energy is available to the muscles for longer periods of time!

Only the upper tier of pre-workouts and sports nutrition products will feature the nootropic alkaloid Huperzine-A to enhance cognitive function levels and neuroprotective properties. Huperzine A is an alkaloid purified from club moss (Huperzia serrata) and boosts focus while training.

This well-known ingredient works indirectly to buffer acid and reduce fatigue by increasing levels of carnosine in the working muscles thereby allowing you to push your reps and sets deep into the growth zone.

Carnosine consists of the amino acids beta-alanine and histidine which occur naturally in the body, and is one of the primary compounds that buffers acid in recently activated muscle tissue. An increase in intramuscular carnosine levels can increase the buffering capacity of a muscle, further delay the onset of muscle fatigue and failure, while improving muscular strength and endurance.

There’s a reason so many energy drinks feature Taurine, namely due to its ability to reduce the acute effect felt by both the jolt of caffeine entering the body and to mitigate the jitteriness. Many consumers of Taurine will agree that it increases the enjoyment of the effects of caffeine. Additionally, it's considered to be an “osmotic agent”, meaning that it draws water into cells. And when cells have a higher water content, they tend to produce more effects related to recovery and anabolism.

Taurine is often included with fat-burning supplements because it can help reduce the side effects of muscle cramping.

N-Acetyl L-Tyrosine (NALT) is an acetylated derivative of the nonessential amino acid, L-Tyrosine, that is used in the process of protein synthesis. Tyrosine is also a precursor of several chemicals and neurotransmitters such as dopamine and norepinephrine.

Choline is a molecule mostly used for either its nootropic or cognitive boosting properties (turning into acetylcholine, the learning neurotransmitter) or as a liver health agent, able to reduce fatty liver buildup. Choline is an essential nutrient that is the building block for phosphatidylcholine cellular membranes and the precursor to acetylcholine, which is an important neurotransmitter involved in memory, muscle control, metabolism and transport of lipids.