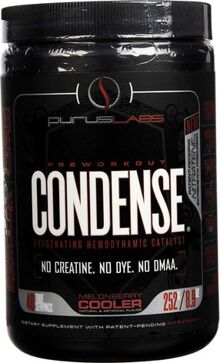 Go to Store
Quick Links to Deal PricesHow does this work and how do stores get listed? See our disclosure below to learn more.
Select Variation(s):
Size
Deal Price
40 Servings
$24.74
Go to Store
Go to Store
Compare store prices
See all Purus Labs Products on PricePlow
Ingredients

Inorganic nitrate found in beets, spinach, etc…proliferates nitric oxide through a novel biological pathway, converted through entero-salivary circulation as opposed to the more traditionally known nitric oxide pathway. Although nitrate, as related to exercise performance, is still in its infancy, the results on performance parameters are nothing short of salivary (pun intended)!*

Nitrate has been shown to be a powerful aerobic and anaerobic ergogenic aid by reducing the oxygen cost of exercise, translating into lower perceived exertion and/or a greater maximal workload capacity. Astonishingly, the increased work comes without an accompanying increase in blood-lactate, meaning your muscles actually become more energetically efficient. This increase in mitochondrial efficiency (P/O ratio) is due to the reduced cost of ATP (muscular currency) to produce muscular force.*

This non-proteinogenic amino acid is a constituent of muscle-carnosine (beta-alanine-l-histidine), however, myocarnosine content has been shown to be significantly increased through beta alanine supplementation alone. Carnosine, which beta alanine enhances the muscular concentration of, helps stabilize muscular pH levels by buffering the hydrogen ions produced through intense exercise. Intuitively, this stacks nicely with nitrates as they synergistically work through different modalities to achieve the same endurance effect.*

Betaine, or trimethylglycine, is an interesting compound found in beetroot juice as it serves as an osmolyte (protecting cells against dehydration), an antioxidant, and a methyl group donor serving to lower homocysteine levels. Human performance studies involving betaine found it increases power and force performance measures amongst trained individuals and was elucidated through these exercise protocols: bench press throw, bench press force, squat force, and vertical jump power.*

Ionized salts are abundantly found within our bodies and serve the chief primary function of maintaining specific concentration and charge balances across cell membranes. We include the electrolytes sodium, potassium, and chloride within Condense to aid in maintaining optimal hydration status and blood volume during strenuous physical activity thereby blunting a rise in cortisol and quickening recovery.*

As with all Purus Labs products, only ingredients with human, orally-efficacious research are used, AND each ingredient is included at the research-validated dosage. Utilizing patent-pending Nitratene nutrient-technology, Purus Labs continues to revolutionize the sports nutrition industry and offer consumers a light in an industry shrouded in darkness.