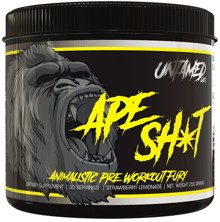 Go to Store
Quick Links to Deal PricesHow does this work and how do stores get listed? See our disclosure below to learn more.
Select Variation(s):
Size
Deal Price
20 Servings
Buy 1 Get 1 FREE
$32.00
BOGO
Go to Store
Go to Store
Compare store prices

Do you want intense focus, rage, energy, and pumps all at your command?

You’ve got it now thanks to Untamed Labs Ape Sh*t pre workout!

Ape Sh*t is a high energy pre workout supplement formulated to infuse the CNS with relentless aggression, motivation, and determination, helping athletes to dominate their training like never before!*

Using a synergistic combination of stimulants, nootropics, and potent NO boosters, Ape Sh*t is truly an all-in-one pre workout supplement.

Who is Ape Sh*t for?

Ape Sh*t pre workout is for anyone who’s ever had one of “those” days -- the days where you’re stuck in traffic going to and from work. The days when you drop your phone in the toilet. The days when no matter how hard you try, you can’t seem to please your overbearing, micromanaging boss.

On these kinds of days, it doesn’t take much to set you off and make you go ape sh*t.

Untamed Labs has manifested these same feelings in powder form with Ape Sh*t pre workout. Ape Sh*t imbues gym rats with that same sense of irate aggression and intensity that will help you obliterate the iron, make gains, and shatter PRs like never before.*

L-Citrulline is an amino acid recognized as a superior nitric oxide support agent that promotes increased blood flow, vasodilation, vascularity, and best of all, PUMPS!*

But that’s not all…

L-Citrulline isn’t just great for aesthetics, it has also been shown to boost performance and energy production as well as support lean body mass.*

That’s where beta alanine comes in.

Ultimately, beta alanine may help athletes to grind out more reps and get more work done before succumbing to fatigue.*

Hydration plays a critical role in performance and pumps. L-Taurine is a conditionally essential amino acid that supports both due to its actions as an osmolyte.*

Agmatine is a fascinating compound that possesses a wide range of activities. For starters, agmatine supports NO production by inhibiting arginase, the enzyme that degrades arginine (the amino acid responsible for N.O. production).*

Agmatine also has been noted to stimulate eNOS (endothelial nitric oxide synthase) -- the enzyme that catalyzes the production of nitric oxide.*

Choline is an essential nutrient for normal brain development, nerve function, muscle movement. It also serves as the precursor to acetylcholine -- the “learning” neurotransmitter -- which plays a critical role in learning, memory, focus, and the ever-so-important mind-muscle connection.*

Reduced acetylcholine has also been implicated as a contributing factor to the onset of fatigue in athletes. Supplementing with choline may help attenuate this drop in serum choline levels, helping athletes perform better mentally and physically.*

Caffeine is the consummate pre workout ingredient, renowned for its ability to help boost energy, focus, mood, motivation, and performance.*

This unique combination of caffeine is also what sets Ape Sh*t from other pre workouts as it delivers extreme energy without the crash, headaches, or jitters -- just pure energy, focus, and motivation!*

To up the intensity and energy even further, Ape Sh*t pre workout has added the powerful CNS stimulant, Yohimbine.

Yohimbine is an alpha-2 adrenergic receptor antagonist that increases adrenaline and noradrenaline levels in the body, stimulating the “fight or flight” response and leading to greater feelings of alertness, energy, and motivation.*

Toothed Clubmoss is a plant known as a “firmoss” which contains the prominent nootropic, huperzine A.*