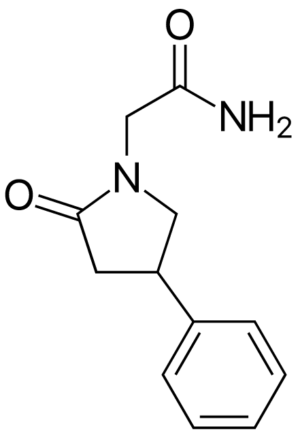 Phenylpiracetam is a powerful nootropic that's part of the racetam family found to boost cognition, motivation, and memory.

Phenylpiracetam, also known as Phenotropil and Carphedon, is a cognitive-enhancing nootropic similar in nature to piracetam, a member of the racetam family of compounds.[1] Phenylpiracetam was originally given to Russian astronauts to increase their mental capacity and cognition, and has become one of the most popular nootropics the past couple years.

Since its inception, phenylpiracetam has been used by those looking to enhance their mental capacity across a wide landscape. Nowhere is this more evident than in the work or study environment, where maintaining peak concentration and productivity is nearly impossible for an extended period of time. Whether it's due to mental fatigue, overstimulation (too much work), or boredom, the end result is the same – reduced output. To combat this, racetams were originally created in order to enhance the brain's abilities above and beyond what is normally attainable.[2]
Before we get any further, you can use PricePlow to compare prices on phenylpiracetam below. Doses of 100-200mg, taken up to 3 times per day for a maximum dosage of 600mg are the norm.

Note: If you are a drug-tested athlete, phenylpiracetam in on WADA's banned substance list.[3]

Many nootropic users have already studied piracetam, so it's great to compare and contrast the two.

The fundamental difference between phenylpiracetam and piracetam is the addition of the phenyl group, which makes it both similar to phenylethylamine (PEA) and piracetam; therefore, imbuing it with a few additional characteristics over that of regular piracetam. 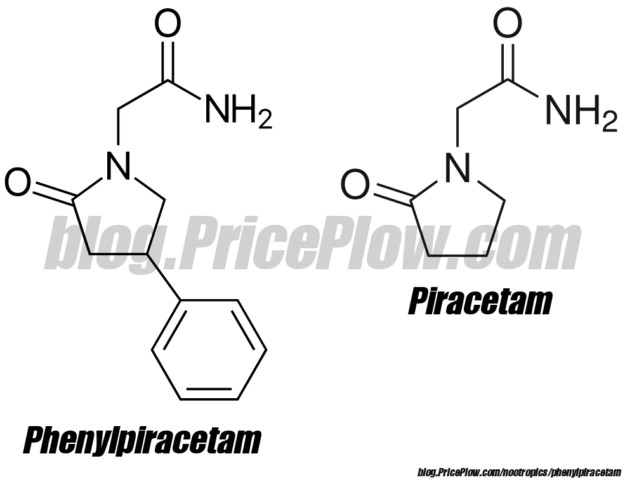 For this reason, we must warn you that you must never use this compound when on prescription drugs unless you have a doctor's written consent -- it cannot be combined with SSRI's or similar drugs. Also note that no statements on this page have been approved by the FDA.

Phenylpiracetam Benefits: the research at hand

While all of its effects have not been adequately studied, phenylpiracetam does have a few low-scale clinical studies showing its effects on various brain functions, including:

Now, it's time to get up close and personal with phenylpiracetam and see how it really work: 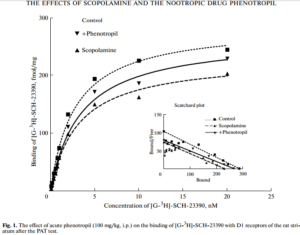 Acute administration of phenotropil (100 mg/kg, intraperitoneally) abolished the pathological scopolamine induced decrease in the density of the dopamine D1 receptor in the striatum.

One of the major benefits of phenylpiracetam over normal piracetam is its alleged psychostimulatory properties, meaning it can act as a "pick me up" for the times when you're feeling a bit down or need extra motivation to continue grinding away at work. To date, researchers haven't entirely determined how phenylpiracetam exerts this effect exactly; however, it's hypothesized that this occurs via at least one of four ways:

Since phenylpiracetam has a phenyl group attached to it, similar to phenylethylamine (PEA), it's been suggested that it can bind to a group of trace amine associated receptors that are associated with psychostimulatory activity in the brain.[5] Furthermore, PEA increases the release of the norepinephrine and dopamine which together are thought to contribute to the wakefulness and stimulating properties of phenylpiracetam.[6] Note that the most powerful and popular stimulants on the market today have the common property of inducing dopamine release which increases wakefulness.[6]

Although dopamine's role in wakefulness isn't entirely understood, it is thought that its ability to bind to dopamine receptors in the striatum, an area of the brain responsible for arousal and stimulation, is the most likely mechanism.[7] Therefore, reduced dopamine signalling in this portion of the brain often results in a feeling of tiredness.[7] 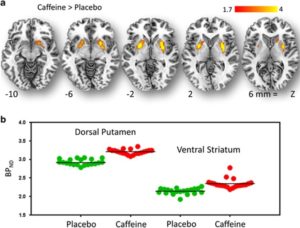 Caffeine D2 / D3 Receptor: This graphic shows caffeine's effects on wakefulness, it's through this same interaction with D2/D3 receptors that phenylpiracetam may also function as a stimulant.

The next possible mechanism through which phenylpiracetam may improve mental functioning is through the increase of the D1, D2, and D3 dopamine receptors subtypes. This is related to the section above, except the effects are exerted through increased receptor density in the striatum rather than through increased dopamine in the striatum. The net effect however, is similar.

It is unknown if these newly-created receptors stay permanently, but it could be theorized that phenylpiracetam has a positive medium-term effect even after it's not in use because of these improvements.

The final pathway we'll explore is phenylpiracetam's ability to bind to AMPA receptors.[6] One of the main modes of action for racetams occurs via AMPAkine activity (named after the receptors in which they interact with) which is also thought to possess increased wakefulness properties.[8] 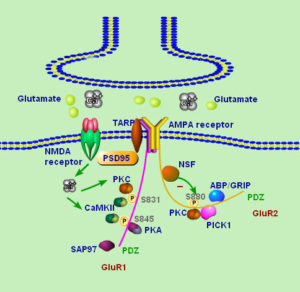 AMPA Receptor: The AMPA receptors present a unique characteristic in the mechanisms of subunit regulation during LTP (long-term potentiation) and LTD (long-term depression), which are involved in the trafficking, altered composition and phosphorylation of AMPA receptor subunits.[24]

In this case, it generates cortical wakefulness without the common jittery stimulation that accompanies most other common stimulants (like caffeine), which means it may hold the potential to be a viable alternative to those who do not tolerate typical stimulants well!

A different kind of alertness...

Furthermore, this form of wakefulness is akin to the form you get whenever you sleep past your alarm clock and desperately need to get to work on time to avoid being late. If you've ever noticed that the startling transition from being in a deep slumber one second to full alertness the next in those situations, then that is what we're talking about. While other catecholamines are also at play in this situation, the feeling of such alertness produced is very similar to that of phenylpiracetam![6]

While learning and memory are not quite the same thing, they both rely on each other to function optimally.[10] Learning is the process in which we acquire new information, while memory is both a record of that process (learning) and of the new information.[11] Memory is then further complicated by the fact that it has several stages that occur between uptake and retrieval that must perform well in order to keep memory functionally optimally.

In other words, if a problem exists in any one step of this process, then your memory capability as a whole is severely compromised. The components of memory (uptake, storage and retrieval) characterise your ability to receive new information, store that information appropriately, and recall old information in that order.[11]

Now, let's take a look at the way in which phenylpiracetam impacts both learning and memory:

Let's now take a look at these three components individually to see how they increase learning and memory.

While the ability to enhance our memories and learning capabilities is an interesting concept, without the motivation to perform work, all this potential will go to waste. Here's where dopamine's role in motivation and reward comes into play.

Here's the PEA 2D Structure Receptor with the PEA Backbone Highlighted. The good news is that it binds with the dopaminergic receptors for a quick mood boost. The bad news is that when used alone, it is metabolized too quickly .This is why it's great to bind to other compounds like piracetam!

A 2012 study involving two groups of rats was set up where one group had low dopamine and the other higher dopamine.[23] Both groups of rats were given the choice of two food piles, one was twice the size of the other; however, in order to get to the larger pile the rats needed to overcome one small obstacle. The low dopamine group preferred to take the easier route and receive the smaller reward whereas the elevated dopamine group were more likely to overcome the obstacle to obtain double the reward.[23]

In humans, the effect is almost identical: whenever a human possesses higher levels of dopamine in the mesolimbic pathway (motivation neural pathway) they work harder for things and remain on task for longer periods in order to achieve their goals. On the other side of the spectrum, those with lower dopamine levels typically slack off more often or take the shortest route possible to achieving the task and often to a much lower standard.[20]

The typical dosage for phenylpiracetam is 100-200mg, taken up to 3 times per day for a maximum dosage of 600mg. The first dose is best taken prior to learning activities or periods where motivation and mental energy is required and then followed by 1 or 2 more doses once energy and motivation levels drop, known as the "3 P.M. lull at work."

Phenylpiracetam's stimulatory effects should be noticed from the first dose; however, its effects on learning (particularly long term memory) take time to exert their effects given they require structural changes in order to occur. So, don't expect miracles if you try this for the first time ahead of a major mid-term or semester final!

Tolerance is known to build with this racetam, and sometimes rather quickly. To prevent this from occurring, it's recommended that you cycle this regularly or save it for those periods of intense all-night work or cramming sessions ahead of a major project or test.

Many users prefer to only use it on weekdays, as tolerance can be built up in as little as four days for some. Monday through Thursday, with Friday through Sunday off is a popular cycle.

It should be noted that phenylpiracetam is not found in nature, so it is not DSHEA compliant as a "dietary supplement". Yet is also not a prescription drug in the US, so it is in a legal gray area. In some other countries, it is known as Carphedon.

Beginners are not recommended to stack with other racetams such as piracetam or noopept - if you're investigating nootropics, you should also read our noopept article, but do not combine them.

Why Phenylpiracetam – putting it all together

There's a reason why this is one of the most popular nootropics lately - not only does it enhance focus, but it adds a zing of feel-good motivation to boot.

Phenylpiracetam has the potential to enhance different forms of memories through its interactions with the glutamate, nicotinic and adrenergic receptors; however, it is generally sought out, not only for these purposes, but also to increase those motivation and energy levels during prolonged study periods or before work.

When enhanced energy and motivation are coupled with an increase in learning and memory, the quintessential "perfect storm" learning environment is created to complete the tasks you set out to accomplish. Count us in.